A One of A Kind Experience

The Railway Carriage Theater to Treno sto Rouf opened in 1997 and “runs” since then as an innovative and integrated cultural venue. It is the only venue of its kind- a monument to modern Greek history and culture. You can find to Treno sto Rouf at the platform of Rouf Railway Station. It consists of nine lovingly-restored old carriages, including the “Greek Wagon” -an original Restaurant Wagon from the 1924 Orient Express- and a Breda type steam engine, which dates from 1953. These carriages are home to a theater stage, a music stage, a restaurant, a foyer, a bar, dressing rooms and utility rooms.

The fully-refurbished carriages of the Railway Carriage Theater to Treno sto Rouf play host to theatrical, dance and music performances for children and adults, educational programmes, events, original entertainment, festivals, projects by young artists, exhibitions, screenings, lectures and romantic dinners and theme parties. During the summer months to Treno sto Rouf also expands onto the platform of Rouf station (Bar “Apovathra”). Its artistic production is definitely non-negligible: till this moment it has staged eleven theatric productions (most of them for two or three succeding seasons), eighteen musicals, five children plays, twenty three literary meetings, seven personal or group art exhibitions and instalations and four festivals for young artist. It has also organized tours in municipalities of Greece and cities abroad (Casablanca, Rabat, Bucharest, Beirut etc.), it has cooperated with important cultural institutions, like the Museum of Contemporary Art, the French Institute of Athens, Goethe-Institut Athen, the Athens Concert Hall and the Thessaloniki Concert hall and has also participated in cultural festivals abroad. With a multifaceted interest in culture, it has translated and published new coming play writers and has also released three collectible music CDs. Both the public and the media have acknowledged Axana Arts Company as the supporter and promoter of young cultural groups and creators and as a nursery for young artists. The Railway Carriage Theater’s repertoire covers a wide range of spectacles and theatrical genres. Keystone for its setup and inspiration are eath time the pursuits, speculations and agonies of contemporary individuals within the greek and international community, on issues of equality, relationships, freedom of Art, female status, ecology, nourishment, economy, politics.

The Railway Carriage Theater to Treno sto Rouf with its ground-breaking presence not only put the previously rundown area of Rouf “on the map”, but also acted as a catalyst for the area’s resurgence, by attracting a variety of different cultural influences to the wider area, which is considered today as Athens’ avant-garde cultural center. To Treno sto Rouf has now been “running” for 17 years and, thanks to the originality of the venue and the exceptional quality of the performances, it has received endless rave reviews in the media and has won over the hearts and minds of the public, hosting up to 300.000 guests so far. Consistently following its initial goals, Axana continuously raises the artistic standards and offers its public –and mostly young people- qualitative and aesthetic education and recreation. But above all, through its cultural and educational actions and the upgrading of its infrastructure, it aims to preserve the unique in the world Railway Carriage Theater, a Greek creation, but also sustain the workplaces connected to this operation.

The Theater Wagon is a fully-refurbished air-conditioned Italian passenger wagon dating from 1950. It has been transformed into a small, charming and fully-equipped theater stage which hosts theatrical and musical performances, lectures, etc. It is fitted with a mechanism which simulates the motion of a train travelling along the railway lines.

The “jewel” in the crown of the Railway Carriage Theater, having both historical and aesthetic value, constructed in 1927, also known as “the Greek Wagon”, is an original wagon-restaurant from the celebrated Orient Express -and in particular of the “Simplon” route. Fully refurbished, one of the few remaining examples of its type, it is steeped in the atmosphere of this legendary era and is home to the music stage. Inside this mystical environment, 33 privileged spectators have each time the chance to experience a unique evening: Original music performances, art events and theme-nights are held here and food and drinks are also served.

The Wagon Bar is an old wooden cargo, used to transport “eight horses and twenty men” during the Second World War. Nowadays it opens as a bar until late at night, with music, DJs, drinks and snacks. It also often hosts site-specific performances. In this atmospheric and cosy wagon guests can enjoy a drink, meet the artists from the various performances or can even hold a party. During the summer months the wagon also operates as the outdoor Bar “Apovathra”.

The Wagon Restaurant is a restored pre-war dining car, which is now a restaurant. Guests can enjoy a meal in the authentic, romantic atmosphere of a bygone era or attend art installations, live music shows, foto exhibitions and innovative artistic events, depending on the artistic program of each season.

Discover “Apovathra”, the outdoor platform of the Railway Carriage Theater to Treno sto Rouf, at Rouf railway station, only ten minutes from the lively Gazi district. Enjoy refreshing cocktails, delicious Greek snacks, hip DJ sounds, art exhibitions, video screenings and live musical performances. Escape to the coolest spot of the city during summer. Enjoy the atmosphere among the blooming oleanders and the subdued lighting from the train carriages of the unique Railway Theater. 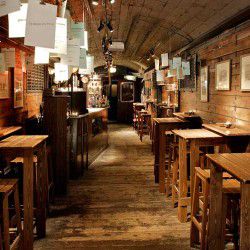 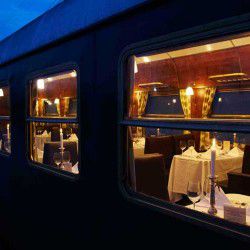 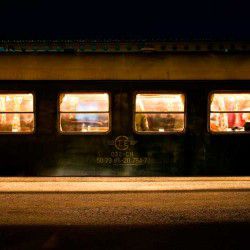 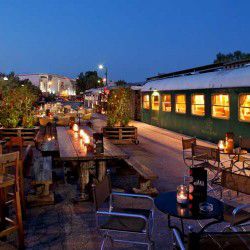 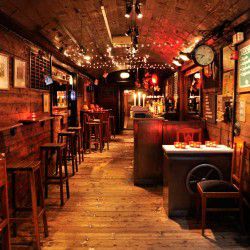 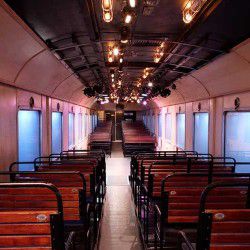 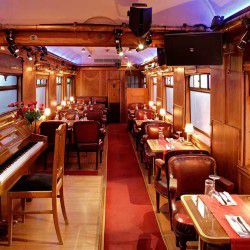 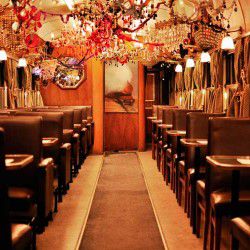 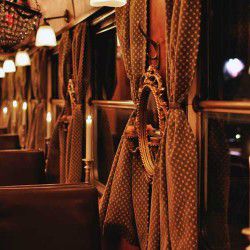 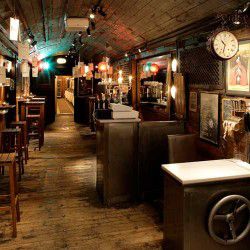