October 31, 2016
The Athens of Christmas: Don’t think twice!
Christmas is arguably “the most wonderful time of the year, with the kids jingle belling. And everyone telling you, be of good cheer”! An emotional holiday no doubt, filled with light and hope, is the perfect opportunity to explore Athens at your own pace, taking in the festive aura of city fused out of antiquity and modernity. Let the Christmas spirit flow through you, cleansing any bad thoughts or worries of the year that is coming to pass, just in time for the new year and new beginnings. 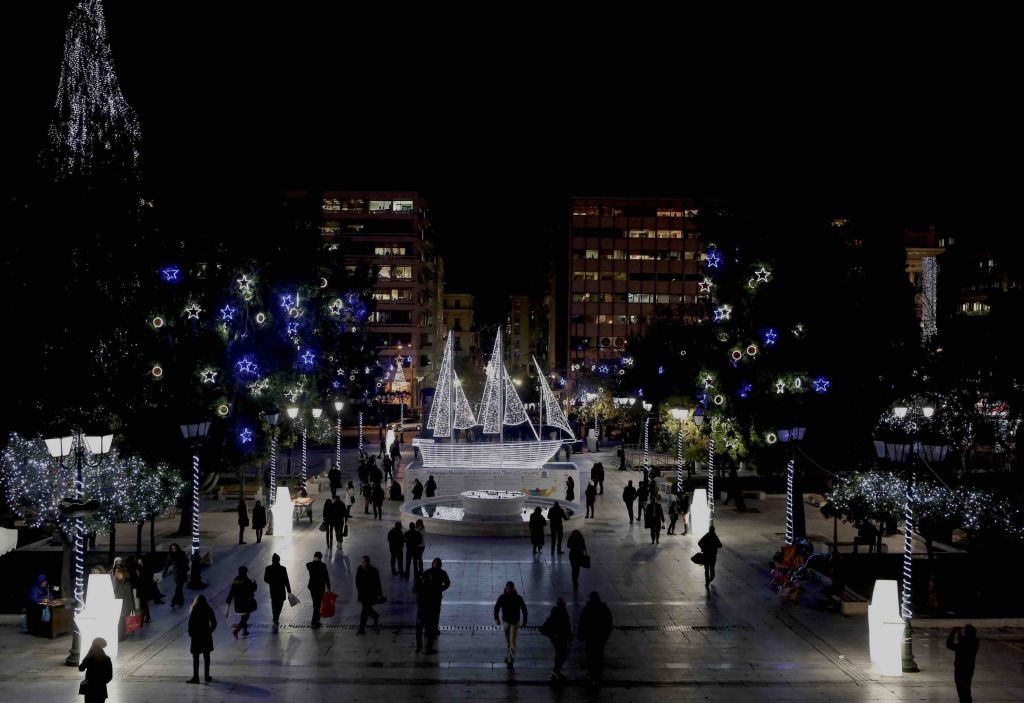 Athens has so much to discover, around the centre and beyond. Even locals don’t know it all by heart, as there is always something changing; apart from all the ancient heritage with which Athens city is brimming, all the main historic artefacts and impressive sites are within your… walking reach. Christmas however, breathes new life into Athens, starting at Syntagma square with its massive X-mas tree, and brightening up every corner of Plaka, Monastiraki and Psirri, with decorated streetlights and lamp posts to create a truly enchanting ambiance.     As the city is dressed in its best attire and the weather is colder but still very bearable, Athens is full of possibilities!

Discovering the historical sites of the centre, on foot 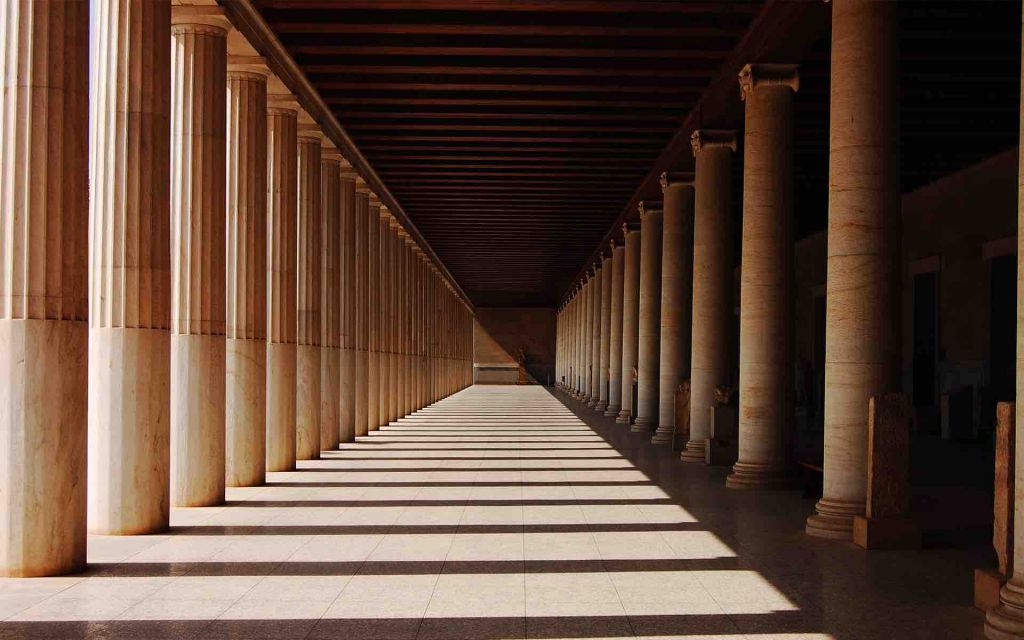 Athens has myriad of archaeological finds; others are obvious and others are hidden. This gives you the choice to either explore the city on your own or if you want to avoid being distracted, you can trust the Athens tour professionals, Key Tours and unveil all that Athens has to offer paired with the deep knowledge of an experienced guide. If you decide to do it on your own terms, then your exploration can begin at the impressive Temple of Olympian Zeus, and the monumental gateway of Hadrian’s Arch. Two ancient sites that are separated by many centuries that are just minutes from the foot of the Acropolis. Walking up towards the ancient rock on Dionysiou Aeropagitou str., you’ll find yourselves on the Acropolis promenade, Athens’ most exclusive residential street that offers direct views of the Acropolis and Parthenon. Don’t miss out on the occasional horse & carriage ride which is especially romantic. To the left, you come across the Acropolis museum that displays a myriad of ancient secrets, in a beautiful glass building that reflects light from everywhere. The Acropolis is, figuratively speaking, on a platter if you choose to dine at the rooftop of AthensWas, while it may be even more magical to book a Christmas dinner with an Acropolis view.

Leisurely strolls for shopping and entertainment 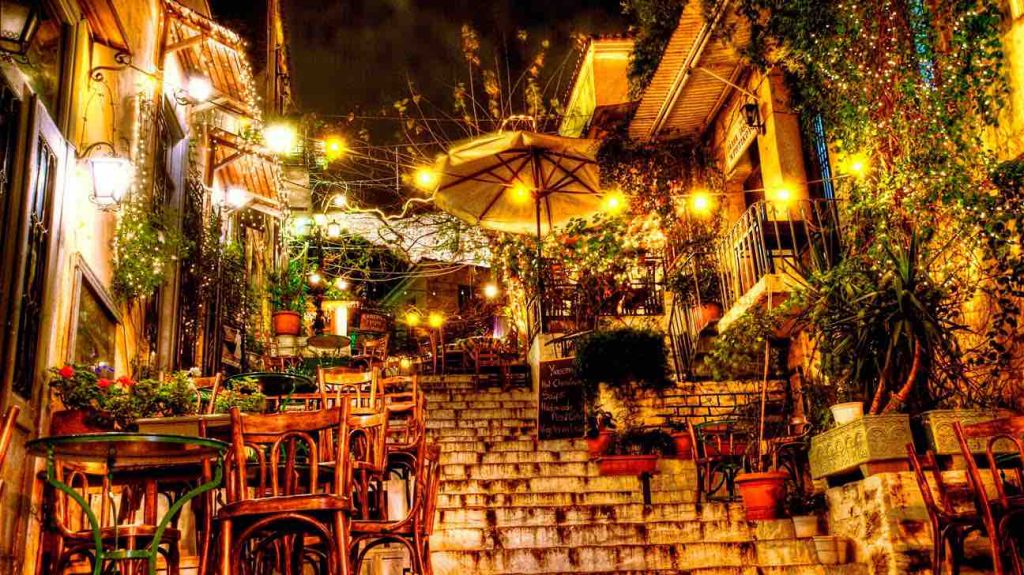 Christmas time finds the high street of Athens, Ermou, packed with Athenians who, unlike most Europeans, do their Christmas shopping at the very last minute. For this reason, shops have special holiday opening times, and the shopping malls and centres are dressed in festivity. If you can’t brave the crowds, you can hold off shopping until January which is the winter sale season! Apart from the popular Ermou which begins opposite Syntagma square, the area of Kolonaki is the haute couture fashion hub and much quieter, if you can afford it, at a walking distance from the centre. The City Link ‘stoa’ is at its most picturesque during Christmas, a shopping walkway that hosts quaint cafes and bistros in which you can have a short break to rest your feet. And to show that shopping has been an ancient tradition in Athens, introducing the Stoa of Attalos, the first Greek Agora (now in reconstructed condition) in the area of Thiseio, on the other side of the Acropolis as you follow the promenade round. In terms of entertainment, casual local drinks such as the hot Rakomela are very popular in the areas around Monastiraki and Psirri, and apart from the endless bars you’ll come across while sauntering around, if it’s a quality show you’re after during Christmas, then the Athens concert hall, Megaron, is hosting Tchaikovsky’s ‘The Snow Queen’.

One Day Trips near Athens to quench that cultural thirst 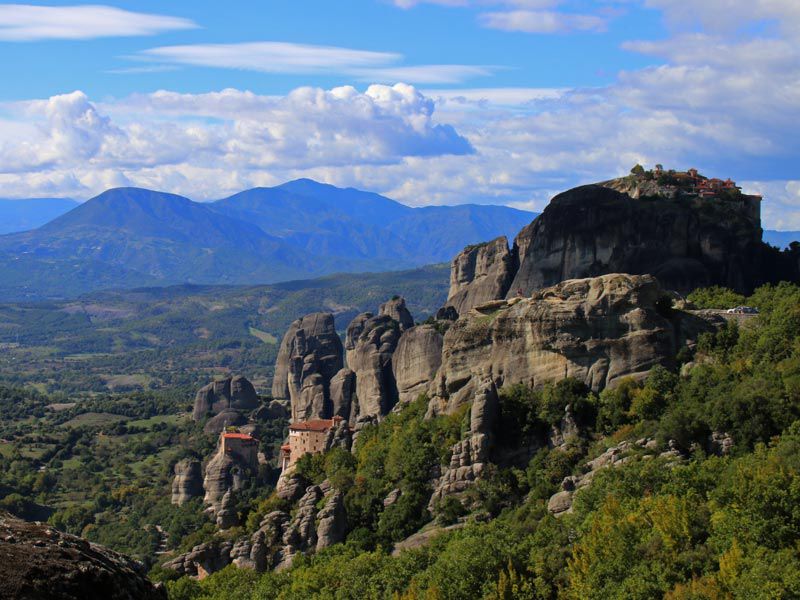 If you simply can’t get enough of the ancient charm of Athens, and if you have a day (or two or three) to spare, consider embarking on a one day tour to some truly landmark locations, easily accessible from Athens. The oracle site of Delphi is one of those. Once thought to be the navel of the world, this temple site is laden with myth and legend against a backdrop of spectacular landscapes. Roam around the well preserved monuments and feel the power of this spiritual place. The ancient site of Mycenae is another such location, and combined with a tour of Epidaurus theatre you’ll discover a major centre of civilisation and get a sense of the culture that once flood this place.     Last but not least, one of Greece’s most astonishing natural sites, the Meteora mountains that are home to numerous Monasteries, making it a place of spiritual healing as well as an imposing natural landmark. To get to see Meteora within a day, opt for the one day train tour which gets you there effortlessly while experiencing stunning visuals of the countryside during your journey!

Athens F City
Back to blog >>