December 19, 2016
There’s a Plan To Rebuild the Colossus of Rhodes

A 500-foot bronze statue of the Greek god Helios, towering over the entryway to a port. Just think of the Titan of Braavos from Game of Thrones. 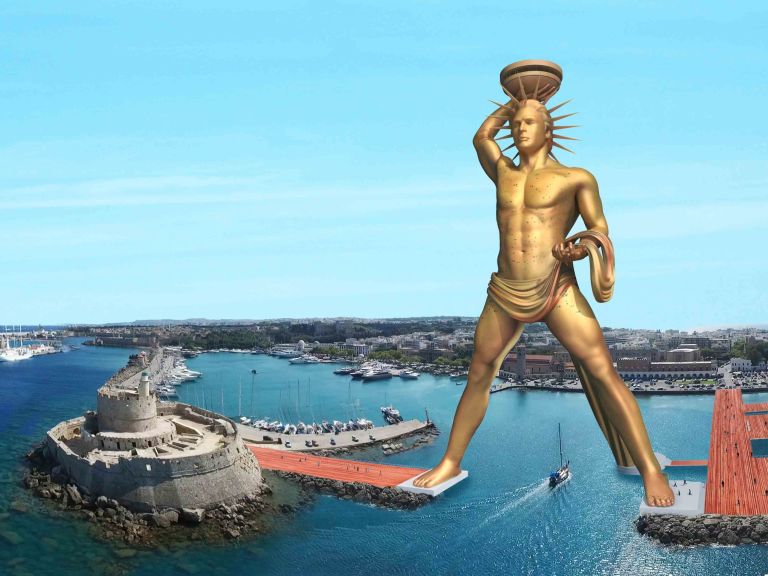 A collective of European architects has proposed to build a 21st-century version of the Colossus of Rhodes, the ancient Greek statue erected on the island of Rhodes in the 3rd century B.C. The new statue would stand 500-feet tall and serve as a cultural center as well as a lighthouse.

One of the Seven Wonders of the Ancient World, the Colossus of Rhodes was a 100-foot bronze statue of Helios, the Greek titan-god of the sun. It was constructed in 280 B.C. to celebrate a military victory over Antigonus I Monophthalmus, the ruler of Cyprus who unsuccessfully besieged Rhodes in 305 B.C. The Colossus stood as one of the tallest structures of the ancient world until an earthquake brought it crashing down in 226 B.C.

Now, a group of architects, civil engineers, and archeologists from around Europe want to build a modern version of the statue, five times taller than the original. The project website describes “a contemporary 150-meters-tall building which would be used as a cultural center, as a library, an exhibition hall and a lighthouse.”

The designers want to cover the entire exterior with solar panels to power the enormous building. To ensure that the statue won’t succumb to the same fate as the old Colossus, the engineering team says they will use “intelligent systems to prevent the consequences of earthquakes and wind forces.” This amounts to building the statue as a tripod structure—two legs and a third support from the sash draped over the titan’s arm and touching the ground—and placing a heavy steel support around the base to act as a counterbalance. A suspension system would allow the statue to rock back and forth.

The Colossus of Rhodes Project says in its mission statement that one of the project’s goals is to ease the economic hardships that have plagued Greece lately by both employing construction workers and attracting tourists to the island of Rhodes. The planned statue is intended to “put Rhodes again on the world map.”

The backers estimate the cost of the statue at $283 million. They believe they can raise that much money through crowdfunding and private investments. It’s an incredibly ambitious plan to be sure, and we’re not convinced that it will ever get off the ground. But if the Colossus of Rhodes is resurrected, sailing into the island’s harbor would be the experience of a lifetime—a real life version of cruising into Braavos.

Culture
Back to blog >>