The increased numbers of its objects, staff, visitors and activities in the past two decades obliged the Benaki Museum to redefine its character based on modern demands and to ensure the conditions required to make its operation more comfortable in the future. Thus it was deemed necessary to de-congest both material and services, but with a conciliatory compromise between the precepts of the past and more radical new museological views. The rationale behind the present-day structure of the Museum is now governed by the altogether modern decentralizing spirit of a satellite concept and democratic order, with a number of autonomous branches around an initial central core.

In the Museum’s neoclassical building, after its usable areas doubled in size as a result of the enlargement, only the collections that “narrate” the history of Hellenism over time were displayed in an enriched form. On the first of the building’s five levels are the offices of the academic and scientific departments, the Exhibitions and Publications departments, the Educational Programmes and Information Technology departments together with the Director’s, Assistant Director’s and Secretariat offices. The same level houses the Library, the hall in which the Board of Trustees meets, together with support groups, the Financial and Legal Services, the offices of the Gift Shop, Security Services, Staff and Custodial Staff, and Technological, Electrical and Mechanical Supervision. The ground floor, where the visitors’ entrance and exit are located, accommodates the first Museum Gift Shop in Greece, while on the terrace, apart from the Temporary Exhibits Hall and a small amphitheatre for holding seminars, there is the Restaurant-Snack Bar, also the first in Greece.

The other sections that make up the Hellenic core of the Benaki Museum have become independent centres, including the Photographic and Historical Archives not only because of their unexpectedly spectacular enrichment, but because they serve research needs first and foremost. The move of the Historical Archives to Kifissia was facilitated by the donation of Stephanos and Penelope Delta’s villa by their daughter Alexandra Papadopoulou, and that of the Photographic Archives to Kolonaki Square by the bequest of a large house by Mary Karolou and Penny Blagali. The more recently constituted department of the Neohellenic Architecture Archives, whose enrichment met with a surprisingly good response, was eventually established in its definitive and ideal location in the New Building on Pireos Street.

The property in the Syntagma Square district that was donated to the Museum by Nikos Hadjikyriakos-Ghika is evolving into an independent branch after its radical repair. Here the residence, studio and Gallery of the artist’s works will remain as permanent exhibits and the other levels of the multi-storey building will be used to make known the works of the 1930s Generation.

In the equally important second significant axis of the new organisation chart, that of foreign cultures, another satellite branch was established upon the independence of the Islamic Art collections and their move to the building complex in Kerameikos that was donated by Lambros Eutaxias. It is anticipated that the Chinese, Indian and Pre-Columbian Art sections will, by 2008, have been housed in the building on Pireos Street, where it is hoped that the still homeless African Art, which is unknown in Greece, will also be housed eventually.

Among the various independent branches that today support the functions of the Museum, the building on Pireos Street, with its avant-garde architecture and its attraction of the younger generation, has proved to be one of the most significant cultural centres in the Greek capital. With the largest and best exhibition areas, with its 400-seat amphitheatre and large atrium, with its snack bar and gift shop, it is equipped according to the most up-to-date technological specifications so as to serve the complex organisational demands of artistic, musical, conference, dance, theatrical and cinema events simultaneously. Another of the basic support units is the Toys and Childhood Department, whose collections will be displayed to the public when repairs on the neo-Gothic mansion in Paleo Faliro, the bequest of Vera Kouloura, have been completed. The Conservation Department, organised by individual special fields, takes care of protecting all the Museum material, and is already decentralised in other independent buildings. 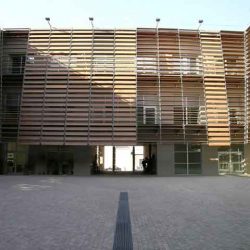 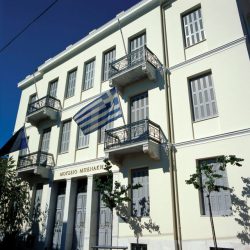 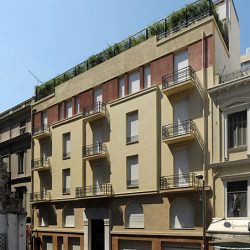 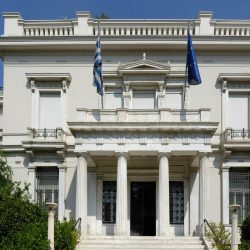 The Museum firmament was recently expanded by the addition of three new satellites: the workshop in the Zographou district – in which all paintings and sculptures of Yannis Pappas are gathered, having been donated by the artist – resolutely fosters the effort that has been made for years now to organise a panorama of modern Greek art. The house on Lycabettus that was a bequest of Eleni Theochari-Perraki, together with all her puppet theatre material, reinforces the work being carried out in related departments of the Museum. The acquisition of the post-Byzantine Monastery of the Virgin Mary in Limeni, Oitylos with the financial contribution of the Stavros Niarchos Foundation, encourages the prospects of the Museum’s favourable intervention in Greece as a whole, providing of course that the Monastery can be restored and eventually house a Study and Research Centre on the Traditional Culture of Mani. Precisely the same holds for the future operation in other regions of two Hospitality Centres for persons of culture and the arts from Greece and abroad.

The theoretical foundation for the ideology that animates the New Benaki Museum is obvious enough not to require any further elaboration. It is, in short, an “open” system, i.e. relieved of the lurking threat of entropy, but also socially sensitive, thus ensuring confidence in its broad acceptance.

Culture Museums & Galleries
Back to blog >>