The first mapping of the active cracks around Santorini was carried out by a research team with the participation of Greek and American scientists. By analyzing the data that were gathered two years ago with a research vessel, scientists unveiled that the enchanting sea bottom of Santorini is full of typical volcanic cones and submarine terraces.

New impressive features have recently been published in the Tectonophysics journal. The evidence is based on the processing of data collected by the oceanographic vessel Marcus Langseth (the world’s largest vessel, that traveled from America for this purpose) in 2015 under the Proteus research program. Scientific coordinator of the program, Emily Houft of Oregon University, and Evi Nomikou, a Greek Assistant Professor at the Department of Geology of the University of Athens.

Thanks to the state-of-the-art equipment of the oceanographic ship, a high-resolution mapping of the bottom was created. The new scientific work concerns the basin west of the Christiana (islands in the southwest of Akrotiri) up to the Amorgos basin. “For the first time, we mapped the active ruins of the area between Santorini and Amorgos,” Mrs. Nomikou explains. “It is a valuable knowledge. For example, in the recent earthquake in Lesvos, one of the problems was that the fault that has been done has not been mapped. Thus, we now know that the area east of Santorini is more active than the region to its west. “

High-resolution mapping of the bottom gave many new elements to the existing researches. “In the area between Santorini and Amorgos, we found two underwater landslides, probably linked to the 1956 earthquake (7.4 Richter at the Amorgos fault) and to the tsunami generation. These data are important for tsunami scientists because they can use them to understand the mechanism of generating a tsunami and to model simulation models. “ 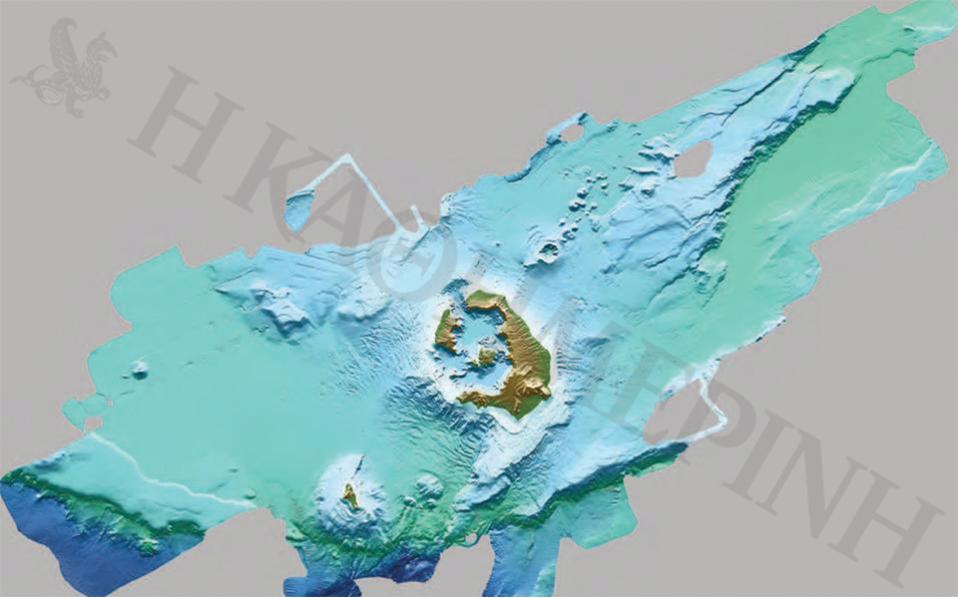 As it turns out, volcanic activity is concentrated in the area of the Kolumbo volcano (located in the basin of the island of Anidros, northwest of Santorini). “We mapped a total of 26 volcanic cones. In fact, we found an old volcanic cone between Milos and Santorini, a region for which we did not have much data yet. “

The bottom around Santorini is impressive. “The analysis of the topography of the bottom revealed submarine “stairs “, like the terraces that exist in the Cyclades. Their systematic study will show us if they were created by the gradual deposition of material from the volcano or the deformation of the bottom and the volcanic landslides from the great eruption of the Minoan era.”

The mapping of the sea bottom of Santorini is highly accurate. “We need an oceanographic ship, high-quality machinery, and therefore collaborations with scientific institutions in Greece (such as HCMR) and abroad,” explains Evi Nomikou. “But most of the earthquakes in Greece are taking place in the subsoil area. Therefore, the mapping of underwater active fissures in the Aegean is necessary “.