Greek mythology was a part of the religion of Ancient Greece.  The body of myths belong to their gods and heroes, the nature of the world, the origins of the cult and ritual practices of Ancient Greeks. The Greek myths were a fragment of an oral tradition that was initiated during the Bronze Age while the storylines and themes were revealed in the written literature from Hesiod and Homer, key sources of mythology, during the Archaic and Classical periods. In fact, Greek mythology became a part of the European culture owing to the fact that many stories became known through mythology. Greek mythology was utilized as a way to elucidate the environment in which humanity lived, the passing of time through the seasons and the natural phenomena that were witnessed from the humankind. Moreover, myths were a part of the religion of Ancient Greece, which enlightened the origin of the gods, where humanity had originated from and where humanity was going after death. Most importantly, myths were used to narrate historical events so that people could preserve contact with their ancestors. The main characters dominating in Greek mythology are the Olympian Gods, the Titans, the Creatures and other Major Deities. The main themes dominating in Greek mythology is the War theme as an inevitable part of existence, the Love theme as examples of loyalty, trust and eternal love, the Heroes theme depicting marvelous achievements of virtue, strength and honor, the Underworld theme as an expression of cultures for death and the Morality and Fate theme representing visions of right and wrong behavior along with the consequences. The legacy of Greek mythology has profoundly influenced Western civilization in terms of their themes and stories of the Greek literature and drama writers, Italian and English poets, mythical figures in Greek arts of the Archaic, Classical and Hellenistic periods, scenes from Greek mythology in artworks from Renaissance artists, mythical stories performances in operas and mythological names to the constellations and planets in the sky.

Gaia, else known as Earth, was a key concept of mythology. Gaia was the goddess and personification of Earth and the creator of the universe. Gaia was the greater mother of all. She was the prime opponent of heavenly gods. Uranus and Gaia were the parents of the first generation of Titans, the ancestors of the Greek Gods.

Nymphs were mythological nature deities associated with a particular landform. Generally, they were regarded as divine spirits who animate nature.

Titans, else known as Giants, were the primeval race of powerful deities, children of Earth and Heaven and parents of six Olympian Gods. They were immortal giants of incredible strength forming the first pantheon of Greek Gods. The first generation of twelve Titans included Oceanus, Hyperion, Cronus, Crius and Iapetus, Mnemosyne, Tethys, Theia, Phoebe, Rhea and Themi. The Titans were overthrown from the Olympian Gods in the Titanomachy.

Uranus, else known as Heaven, was a key concept of mythology. Uranus was the god personification of the heaven and sky. Uranus and Gaia were the parents of the first generation of Titans, the ancestors of the Greek Gods.

In the religion of Ancient Greece, the Twelve Olympians were major deities of the Greek Pantheon residing on Mount Olympus. These were considered to be Zeus, Hera, Poseidon, Demeter, Athena, Apollo, Artemis, Ares, Aphrodite, Hephaestus, Hermes and Dionysus. Sometimes, Hades was included as part of the Twelve Olympians. However, Hades was excluded as he resided in the underworld.

Aphrodite was the goddess of beauty, love, romance and desire who was married to Hephaestus, the god of iron, fire and inventions and had a love affair with Ares, the god of war. Aphrodite was the most attractive goddess Mount Olympus arousing desire to gods and humans. She was also connected to the rebirth and death of nature and human beings.

Apollo was the son of Zeus and the twin brother of Artemis, the god of truth and light, the god of music and the god of archery. Apollo owned the precious gift of prophecy. He was the patron of the ancient city of Delphi, the first oracle of Ancient Greece.

Ares was the son of Zeus and the god of war and violence represented as vicious, ruthless and coward. For this reason, no Greek city wanted to have him as its patron.

Artemis was one of the three virgin goddesses, the goddess of hunting and the protector of wild animals. Artemis had absolute sovereignty over nature and was said to bring fertility to all places that worshipped her.

Athena was the daughter of Zeus, one of the three virgin goddesses and the goddess of wisdom, military skills and crafts. Athena was the goddess who taught mankind various skills such as weaving and sewing to the women and agriculture and metallurgy to men. She also protected the heroes as they went out to war and saved them on their coming back.

Dionysus was born as a demigod and became the god of wine, grape harvest, ritual madness and ecstasy. He was one of the Olympian gods who did not live in Mount Olympus as he was travelling in order to discover the secrets of winemaking.

Hades was the brother of Zeus and Poseidon and the god of the underworld. He almost never left his kingdom and he was not considered as an official god of the Twelve Gods. The helper of Hades was Haros, the angel of dead, who had the duty to transfer the souls of the dead with a boat over the river Aheron from the world of the living to the world of the dead.

Hephaestus was the son of Hera, the god of fire and metalworking and the husband of Aphrodite. He was a kind and lovable god. When his mother saw him for the first time, he threw him from Mount Olympus causing a deformation of his face. Hephaestus was finally rescued from two Nereids who raised him for nine years inside a cav

Hera was the wife and sister of Zeus, the queen of gods and the goddess of women, marriage and childbirth represented as suspicious and jealous.

Hermes was the son of Zeus, the messenger of the gods and the god of commerce and market, merchants, thieves and storytelling. Hermes was the only Olympian god who was authorized to visit Heaven, Earth and also the Underworld and enjoyed this way popularity among all the Greek gods and spirits.

Hestia was one of the three virgin goddesses and the god of home and family. Hestia was a forgiving goddess who never left from the sacred mountain of Olympus. For this reason, all Olympian gods respected and loved her.

Poseidon was the brother of Zeus and the god of sea, rivers and earthquakes represented as moody, greedy and bad tempered. He was the god responsible for natural and supernatural phenomena. Poseidon was able to cause tempests and earthquakes, drown lands, shatter rocks and had the ability to finally bring back peacefulness.

Zeus was the king of gods and the protector of kingship, authority, social order and justice represented as capricious and cruel. Zeus was carefree. He possessed the perfect knowledge and was merciful and prudent. 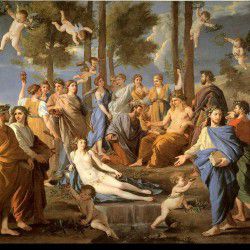 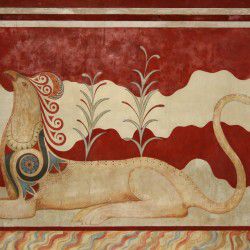 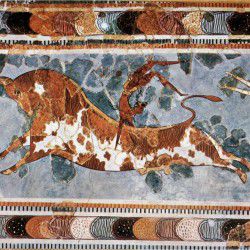 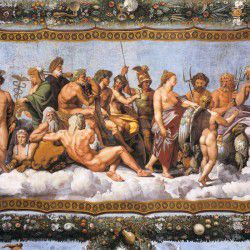