Fairytale Sceneries Under the Charms of the Sleeping Beauty

A monument created from mankind has been depicted as one of the most admired monuments of nature that has managed to magnetize travellers all over Europe. The artificial Plastira Lake was once the dream of a visionary leader, and today is one of the most beautiful destinations of the Greek mainland with landscapes of unrivaled natural beauty. Situated in an idyllic location of Karditsa prefecture, surrounded from the green slopes of Agrafa Mountains, Plastira Lake is the true jewel of Thessaly. Extending over the Nevropolis plateau, the region owes its name to the abundance of deer that once lived there, as Nevros means baby deer. However, Nikolaos Plastiras, an early 20th-century military general and politician whose origin was the picturesque village of Morfovouni, envisioned the construction of the notorious dam on Tavropos river that would give a solution to the chronic problem of water scarcity and irrigation of the Thessalic plain. Despite the fact that the construction of the dam was in the works since 1925, it was finally completed in 1959. Over the years, the dam was filled with 400 million cubic meters of water, so Tavropos lake was created. Rarely human intervention synergize to create a natural environment of such immense natural beauty. Characterized as one of the most beautiful destinations of mainland Greece, Plastira Lake offers magical sceneries of utmost serenity, a pandemonium of colours, landscapes and sensations, all the seasons of the year. Refreshing water sources, oxygen blast, sceneries of utmost serenity and hospitable people will show you the unimaginable landscapes of this lake, a paradise for nature lovers as it provides the opportunity for all kinds of alternative activities of mountain sports. Beautiful and harmonic, with dense vegetation and rugged mountains, Plastira Lake is a place that constantly changes depending on the time of the year, and it is always fascinating! Dense verdant trees, treacherous alpine ridges, crystalline waters of lakeside settlements complement the distinctive charm of Agrafa Mountains. Nothing will ever predispose travellers for such an erotic destination in this corner of Greece. Vegetation reminescent of the nature in Scandinavia and lake sceneries that seem to sprung out of a landscape in Switzerland will travel you to other levels of beauty, where the master is none other than Mother Nature. Flowing springs and streams, traditional villages hanging from mountain ridges and labyrinthine asphalt roads with hundred of flocks grazing in the green banks will show you the authentic face of the Greek countryside. And if you visit Plastira Lake in winter, you will feel like everything have sprung out from a fairytale on northern Europe. This lake will charm you whichever season you choose to explore it. Whether you visit Plastira Lake in the snowy mountains of winter, the verdant nature of spring, the golden leaves of autumn or the wonderful climate of summer, it is definite that this destination will blow your mind.Around the lake, there are millions of picturesque villages of their own beauty and character, with panoramic views of the lake and the the surrounding mountains. Apart from the unique beauty of the lake, the surrounding area attracts many travellers for its impressive sights. Religious monuments, interesting museums, stone bridges, impressive caves and dense forests are just a few of the attractions that will fascinate you. Undeniably, the landscape of Plastira Lake is truly breathtaking!

The Vision of Nikolaos Plastiras

One of the most important political figures of Greece

The artificial Plastira Lake was once the dream of a visionary leader, and today is one of the most beautiful destinations of the Greek mainland with landscapes of unrivaled natural beauty. In 1928, Nikolaos Plastiras, else known as the “Black Rider”, an early 20th-century military general and politician whose origin was the picturesque village of Morfovouni, envisioned the construction of the notorious dam on Tavropos river that would give a solution to the irrigation problem of the Thessalic plain and the problem of water-supply of Karditsa prefecture and take advantage of the force of the water in order to generate electricity. Despite the fact that the construction of the dam was in the works since 1925, his idea was not materialized until 1959, due to the many sufferings Greece went through including the objections of the local community, the German occupation and the civil war. The lake was created at the location where river Tavropos formerly existed, flowing to the south towards Achelous River. Extending over the Nevropolis plateau once was, the region possibly owes its name to the abundance of deer that once lived there, as Nevros means baby deer.Over the years, the dam was filled with 400 million cubic meters of water, so Tavropos lake was created. Unfortunately, Nikolaos Plastiras did not live to see his vision become in reality, as he died in 1953, six years before the completion of construction of the dam. It is worth mentioning that the “invisible” allied airport of “Neraida” used to operate on the plateay before the creation of the lake during the Second World War without ever being perceived by the Germans. It is said that the residents of nearby villages hid the airstrip with trees on daylight and lit bonfires in the evening in order to help the pilots of allied aircrafts. Nowadays, fir, chestnut and oak trees adorn the magnificent landscape that has enliven the entire region of Karditsa with its unique ecosystem and its distinctive beauty. Situated at an altitude of 800 meters, Plastira Lake occupies acreage of almost 25 square kilometers, with a maximum length of 12 kilometers, a width of 4 kilometers and a maximum depth of 60m. The dam has a height of 222 meters. In 1984, Tavropos Lake was renamed in Plastira Lake to honor the inspirer who managed to solve some of the most important problems of Karditsa prefecture. 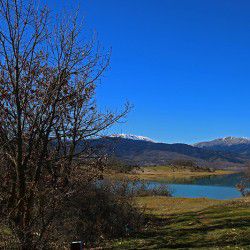 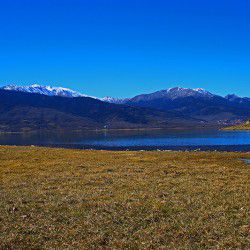 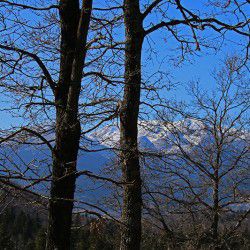 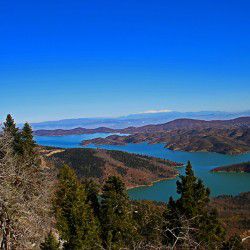 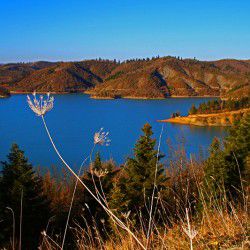 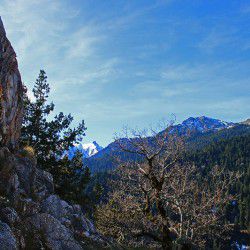 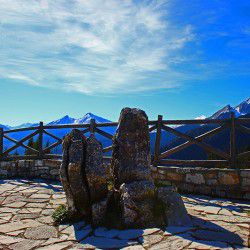 The Tour of the Lake 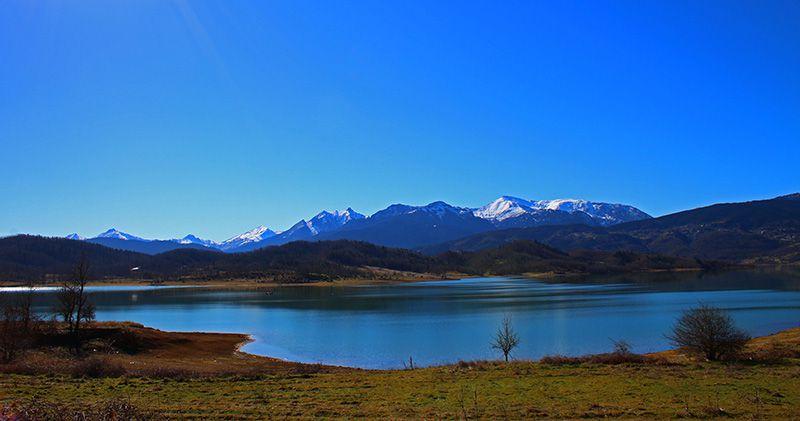 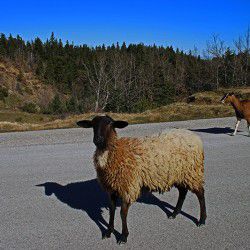 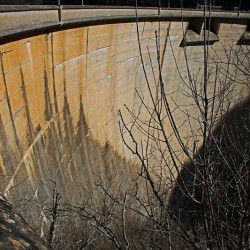 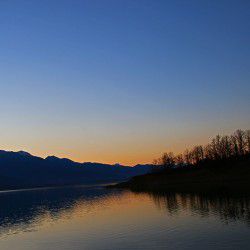 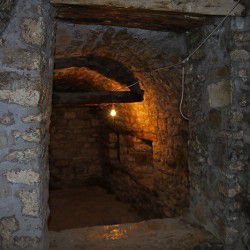 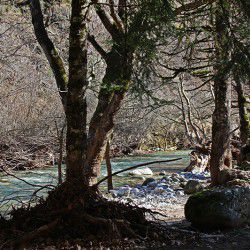 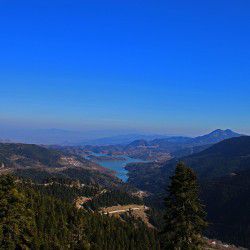 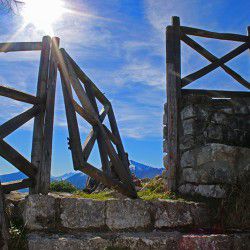 All images are copyrighted by Mysterious Greece

Undeniably, Lake Plastira is one of the most beautiful destinations of mainland Greece. A mankind monument has attracted thousands of visitors all year round, as nature adjusts its colours to the scenery depending on the season; white winter, golden autumn, sparkling summer and colourful spring, whichever you choose, Lake Plastira will fill you with unforgettable moments! Monuments with great cultural and architectural interest, mountain shelters, verdant forests and arched bridges, panoramic vistas of the lake and breathtaking landscapes, what else you might need? The beautiful sceneries of Plastira Lake were imprinted in my mind, the sleeping beauty of Agrafa and the magnificent colours of the sunset from Laberou beach, with the reflections of trees splashing in the lake, the spellbound view from the Observatory and the gigantic size of the concete dam. I still wonder if there is anything more beautiful than travelling!
Issues Archive