If you don’t want to make a pilgrimage with the masses, it’ fine! Part of UNESCO World Heritage Sites, the monasteries of Meteora are one of the most extraordinary sights for climbing. Indeed, rock climbing might be one of the natural talents of mankind offering excitement and improving physical condition through the collaboration of body and mind by surpassing you own self. If you adore climbing up the mountains and staying within the beauties of nature, try to imagine climbing up in the sky at the Meteora Monasteries. Just spectacular! In the holy monasteries of Meteora, visitors will be fascinated from the evidence of people having scaled the cliffs in search of swallows’ nests. Centuries old human activity continues to impress the climber in a place that was believed, from the ancient Christian Orthodox believers, to be sent from heaven. Built into and on top of huge pinnacles of smooth rock, the earliest monasteries were reached by climbing articulated removable ladders while windlasses were used so monks could be hauled up in nets later, a method used until the 1920s. These days access to the monasteries is by steps hewn into the rocks and the windlasses are used only for hauling up provisions. Could you possibly, however, conceive that the climbing history of Meteora travels back to these times, when the local farmers took their animals to the top of the steep conglomerate towers to protect them from invaders and thieves? From the eleventh century onwards, monks settled on the summits of the otherworldly forest of towers, where today reside the six active monasteries on top of the towers of Meteora.The development of modern rock climbing goes back to the late seventies, when Dietrich Hasse started to open routes in the wider area. Today, there are more than 700 climbing routes with mostly an adventurous character, opened in the typical style of the region from both local and foreign climbers. These routes span up to 300 meters in length of all difficulties. Meteora constitute one of the safest rock climbing fields on a worldwide scale attracting climbing lovers from all over the world. One hundred rocks bewilder climbers’ minds of all levels of ability. All of the suggested routes have been created traditionally – climbing upwards – and all you have to do is choose the one that suits you best according to your fitness and level of experience.  The rocks are made of sandstone and gravel, with naturally formatted grips that enable even beginners to enjoy climbing on the spectacular rocks of Meteora. Have in mind, however, that climbing is only forbidden on those rocks where the active monasteries reside. If you really haul yourself up to seventh heaven, among the clouds and the blue sky, your climbing experience in Meteora will be mystical! Although Meteora have been known from their sacred monasteries built on the towering rocks, they also became famous for their climbing areas, an aspiring climbing paradise. Actually, Meteora are thought to be the largest and most important climbing area of Greece! Undeniably, the Meteora rock climbing experience is a truly amazing experience for everybody, the views in combination with the feelings of awe and inspiration, on the particular style of climbing, is different to the majority of other rock climbing destinations. If you find yourselves in glorious Meteora to admire the rock formations, you will probably observe certain figures climbing to the top of these scary rocks. Do not think they are out of their minds, as they are lovers of climbing seemingly defying the law of gravity. Are you ready to touch the sky on the rocks of Meteora? See you at the spectacular, stunning, exhilarating cliffs of the sacred Meteora monasteries! 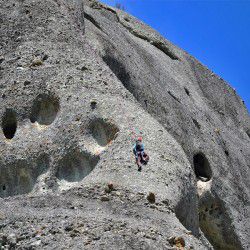 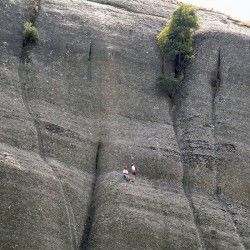 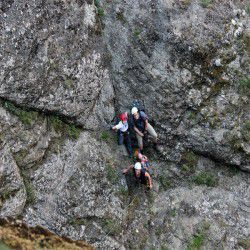 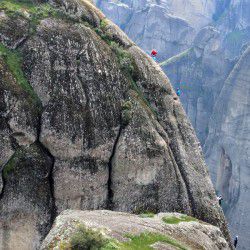 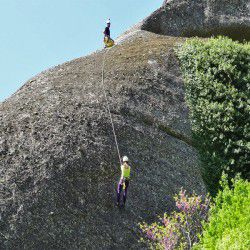