The Paradise of Laconia

Elafonisos ain’t no secret anymore. Some still wonder whether Simos who baptized one of the most beautiful beaches of Greece was a hermit or an abandoned sailor; the mystery still exists! White sandy dunes and crystalline turquoise waters, tranquil moments in a natural paradise as Elafonisos will make you appreciate nature at its grandeur. Used as a hideout for pirates, the land of deer is a genuine utopia. Words could never describe the uniqueness of this island, bordered from the massiveness of the Greek seas, hardly to be found elsewhere, and inhabited from hospitable people of laconic culture. Elafonisos is unlike any other destination of this country, as it reveals a world worth discovering. Its rare natural beauty will definitely touch your soul. From the traditional boats of Agios Spyridon harbor, the patron saint of the island, the exotic beach of Simos with the emerald waters and the cedar forest to the deserted church of Panagia with its panomic vistas to the endless blue of the sea and the bay of Sarakiniko, Elafonisos knows the magic of peacefulness. The mysteries, however, never hide even when they lie across the island. The pristine beach of Pounta with the famous submerged city of Pavlopetri, the oldest in the Mediterranean, the Stroggili Laggoon with the pink flamingos, a protected region from Ramsar, the impressive stalagmites of Kastania Cave, and the legendary lighthouse of Cavo Malias are just a few of the monuments of the southern coastline of Laconia. Elafonisos,however, is a colony of imperious Mani, a rare place, an archaeological site and a region of NATURA 2000 and, believe us when we say that it is the best region to feel serenity and explore a heavenly utopia. Smells of octopus and calamari, which attest the long fishing tradition of Elafonisos, with one of the largest fishing fleets in Greece, the feeling of sleeping on nature, under the Aegean sun, and sounds of the calm sea washing up on the sand, is all you need for this summer. Lying beneath the shady cedars, immerse your fingers in the sand to touch the soul of this paradise. The moment you open your eyes, junipers and dunes surround you, with the shadow of all the shades of blue flirting like a magnet with you.

NEED A REASON TO TRAVEL

If you are looking for a beautiful destination where you can enjoy the tranquility of nature, Elafonisos has it for you! Remote beaches and landscapes of wild nature create an impressive identity of utmost serenity, one one of the top reasons you should travel to this destination. What’s more, genuine travellers and authentic explorers will fall in love with Elafonisos since it is one of the most beautiful destinations of Laconia, if not Greece. Elafonisos offer a genuine getaway with a true spirit of authenticity away from the hustle and bustle of the Cyclades islands. From exploring old monuments of historical value and discovering unexplored caves, to enjoying the serenity of nature and sleeping with the rhyming of the birds, it is definite that Elafonisos promises an experience of a lifetime! The natural monuments compete with the remarkable sceneries that try to imprint your mind with the most beautiful memories. You can imagine how magical this place can be! The locals are famous for their unique Laconian culture, their maritime tradition, and their kind hospitality who hey take care of the travellers with love and care. Idyllic landscapes, always with evocative beauty, will astonish you. Whatever your reason for travelling, Elafonisos are an amazing escape out of the ordinary!

Pavlopetri, one of the oldest submerged cities in the world and the oldest in the Mediterranean Sea, was first discovered from Fokionos Negris in 1904. Famous oceanographer Dr. Nicholas Flemming of Southampton University visited the site (1967) and published the first survey of the submerged settlement while, a year later, a team of archaeologists of Cambridge undertook the first systematic underwater survey of the ruins. Situated off the coast of southern Laconia in Peloponnese, between the beach of Pounta and the isle of Pavlopetri and opposite Elafonisos Island, Pavlopetri is a invaluable archaeological site with an almost complete town plan as it is the oldest underwater archaeological town site in the world dating back 5,000 years. Although the settlement appears to have been abandoned around 1100 BC, latest archaeological evidence indicates that it was populated once more in the Classical and Hellenistic periods. Pavlopetri occupied a valuable prehistoric place in the southern part of Cape Maleas, and was one of the most important ports in the southern Peloponnese, as it monitored shipping from Laconia to the Aegean and the western Mediterranean. Nonetheless, this is not an ordinary archaeological site since the city can be found four meters underwater! In fact, the architectural remnants of this prehistoric town spread over six hectares southwards to the islet of Pavlopetri, divided into smaller rooms, inner courtyards and prehistoric roads. Among the ruins were found stone graves, probably from the Meso Helladic period, along with two Mycenaean chamber tombs while an extensive prehistoric cemetery of cist graves (3rd & 2nd millennia BC) was discovered on the beach of Pounta. Of particular interest are the ceramic vessels that indicate the community’s close relations with Kythera, Crete, the Cyclades and the Northeast Aegean. In 2009, an on-going programme of exploration and excavation was begun from the University of Nottingham, the Greek Culture Ministry’s Ephorate of Underwater Antiquities and the Hellenic Centre for Maritime Research. Today, Pavlopetri has become the first underwater city to be fully digitally mapped and recorded in three dimensions, and then brought back to life with computer graphics and sonar mapping techniques developed by military and oil prospecting organizations. The work of the British and Australian archaeological team was assembled in an hour-long BBC documentary video, namely “City Beneath the Waves: Pavlopetri”, that was broadcasted from BBC Two. The city of Pavlopetri is part of the underwater cultural heritage as defined by the UNESCO in the UNESCO Convention on the Protection of the Underwater Cultural Heritage.

TOP THINGS TO DO

First of all, you should visit the exotic beach of Simos, one of the most beautiful beaches in the Mediterranean, which resembles the Carribean! Surrounded from sandy dunes with cedar trees, the crystalline turquoise waters and the white sand will offer you pristine moments of tranquility. However, one of the most important monuments is the church of Agios Spyridon, the patron saint of Elafonisos, situated in the namesake harbor. Another interesting region to discover is the region of Kato Nisi on the western side of Elafonisos. Situated across the coastline of Mani, travellers will have the opportunity to dive into the crystalline waters of Panagia beach surrounded from the isles of Panagia namely Kasela, Lefto and Prasonisi. There, you will also find the lovely church of Panagia Katonisiotissa with its panoramic vistas. Nature aficionados can visit the wonderful sceneries of Fountianika region. Between the ancient submerged town of Pavlopetri and the legendary promontory of Cavo Malias, travellers can admire the place that once stood connecting the island of Elafonisos with the opposite coast of Pounta. If you are looking for a hiking excursion, hike up to Vardia (276 m.), the highest point of Elafonisos. From this point, travellers can enjoy the lovely landscape from Sarakiniko and Elafonisos Strait to the island of Kythera and the Peninsula of Malea that has been included in the World Natural and Cultural Heritage List of UNESCO. Lovers of adventure can hop into a traditional boat to explore the monuments of Elafonisos; Karandreas Cave is one of the most impressive natural beauties accessible only by sea. At last but not least, it is a must to enjoy the sunset from the beach of Panagia and enjoy fresh fish at the fish taverns of the islands, as the islanders are famous for one of the largest fishing fleets in Greece!

Whether you are looking for a boutique hotel to stay with your family or you desire to find an traditional guesthouse, we have drafted a list with the best accommodation choices in the island of Elafonisos! Capari Suites is a great family-run accommodation choice. The secluded complex offers 14 rooms and spacious suites with living rooms. With wonderful seaside and mountainous views, travellers can enjoy a lovely stay on the greenest part of Elafonisos overlooking the Lakonian gulf. Elafonisos Mare is yet another wonderful hotel situated near the capital of Elafonisos. Boasting stone built lounges with sea views, all rooms and suites at the Elafonisos Mare are well equipped with all the necessary. The excellent ocation of the hotel offers its guests spectacular views of the deep blue sea. Elafonisos Resort is a stone-built and hospitable hotel located in Hora. Overlooking the pool or the garden, all rooms and suites of Elafonissos are fitted with white furnishings and floral fabrics to ensure a pleasant stay.

If you are craving for traditional seafood dishes of the Greek cuisine, you should definitely visit O Ntagiantas (0030.27340.61165). It is one of the oldest seafood taverns of Elafonisos that distinguishes for its fish soup, its lobster pasta and its local wine. Limnitsa (0030. 6973.604801) is a locals’ favorite that distinguishes for its excellent seafood. Famous for the location with suberb sunset views on Panagia beach, Limnitsa tavern has fresh fish coming from the caique of captain Michalis. Shrimp salad, stuffed squir, and lobster are some of its finest dishes. O Aronis (0030.27340.61280) is famous for its fresh fish with tables by the sea. Try fresh fish, lobster and the fish soup “kakavia”! At last but not least, Boukas in Kontogoni (0030.2734.061184) is another excellent choice for seafood. Rissoto with sea treasures and pasta with mussels are two of the tavern’s best dishes!

Access to Elafonisos is easy through a ten minutes ferry trip from Neapoli in Laconia. Travellers will have to follow the route through Tripoli, and then following the signs to Monemvasia and Neapoli. The ferry service departs from Pounta.

The hiking route to the southern edge of Cavo Maleas is a unique experience! Travellers should follow the path that starts at the end of the dirt road, after the Petrified Forest and the church of Agia Marina. Forty minutes later, you will come across the whitewashed chapel of Agia Irene Kavomalia, one of the most beautiful chapels of Laconia. From there, one can continue to reach the edge of the cliff with the monastery of Agios Georgios (13th century), one of the most important churches of Laconia, where travellers will have the chance to experience the truthful history of monasticism in Malea. 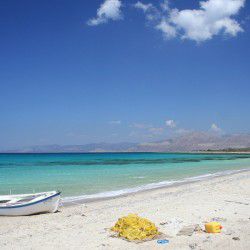 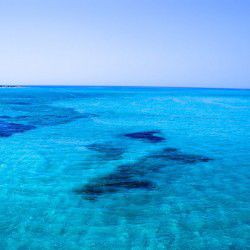 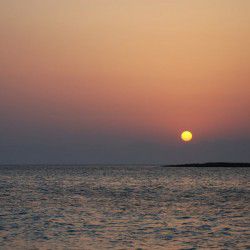 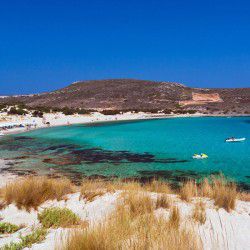 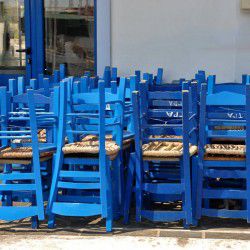 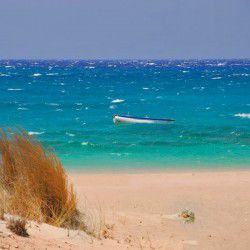 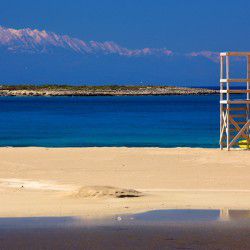 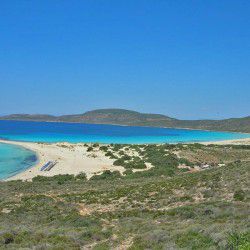 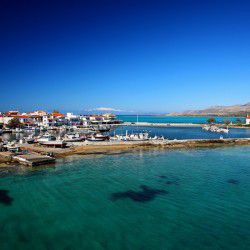 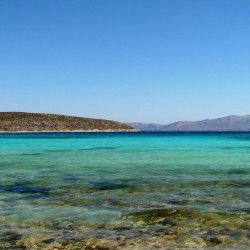 Discover the three-arched bridge of Kalogeriko in