Moutzouris, the Legendary Train of Pelion

The sound of the steam engine will charm you instantly. Strange and rigorous sounds will fill you with excitement and enthusiasm. Can you imagine entering another epoch by travelling in wooden wagons of the past? This very dream of yours may become true on this corner of Greece. Legendary “Moutzouris”/ ”Smudgy” the legendary train of Pelion, is a symbol of the local culture of Pelio that has marked the lives of the inhabitants since the dawn of time.

The Story behind the Little Train of Pelion

During the years of prosperity, the impressive economic and cultural development of the region urged for a transportation solution within the villages of Pelion. Abundant products were produced in the magical mountain of the Centaurs that remained unsold due to the absence of the appropriate infrastructure. Although the marine transport network was relatively advanced, the mountainous region of Pelion remained connected only by narrow pathways. Consequently, the decision to connect the city of Volos with the fertile regions of central Pelion by rail was finally made at the end of 1889. The choice of a network with the narrow range of 60 centimeters was based on the limited tasks of transportation, where the goods of this particular area would be transferred at the port of Volos, while the train line would be much easier to maneuver due to the land’s morphology. The first years of the line’s operation were utterly successful and very profitable, and a thought for expanding the line to eastern Pelion begun to mature. However, the high cost was the main cause of the final decision to construct a line from Ano Lechonia to Milies. The study begun in May of 1900 and the construction in July of 1901, under the general direction of the Italian railroad engineer Evaristo De Chirico, the father of the eminent painter Giorgio De Chirico, who lived in Volos.The construction of this second part of the railway of Pelionn was much more difficult due to the mountainous morphology of the land, and therefore there was a need for even more technical works .Apart from the existing four viaducts, seven bigger stone viaducts and a metal one were built along with two tunnels. Additionally, plenty of other ancillary works were made as well as the stations in Ano Gatzea and Milies. On July 1 of 1903, the construction of legendary “Moutzouris” was completed! After a few days, train closed for reconstruction since a series of problems appeared due to bad weather conditions, and re-operated in May of 1904. However, the dictatorial government decided the final abolition of the railway line from Volos to Milies in 1971. Fortunately enough, there were people who promoted societal interest, respect for tradition and their ancestors’ history. These people created the Friends Society of the Train and fought for the reoperation of legendary Moutzouris. With constant pressure and dynamic protests towards the competent authorities, these people managed initially to dissuade the planned dismantling of the train line from the prefecture. On August 29 of 1987, in the context of the Balkan Exhibition of Handicrafts, the first reoperation of the train took place in Volos. The event was very successful and received nationwide publicity. After these intense efforts, everybody recognized the high importance of the line’s maintenance and reoperation even in the part from Ano Lechonia to Milies. The legendary Moutzouris train line reopened on May of 1996, exactly 25 years since its closure!

The Journey with the Little Train of Pelion

The legendary train of “Moutzouris” whistles and wheezes with his wonderful steam engine the beginning of a journey to another era! On the blossoming days of spring and the golden shadows of autumn, “Moutzouris” will travel you from the charming station of Ano Lehonia to the picturesque station of Milies through a wonderful trip of ninety minutes. This 60 centimeters gauge line, one of the narrowest in the world, hosts four wonderful wooden wagons that will travel you in the past. His nickname, Moutzouris, literally means someone who turns things black, which was named obviously after the black steam smoke of the engines! Are you ready for one of the most spectacular rides of your life? As the maximum speed of the train is 20 kilometers per hour, travellers will have the opportunity to admire panoramic vistas over wonderful gorges, magnificent old bridges and tight tunnels that will make them want to stay there forever. Starting from the picturesque station of Lehonia, lovely Moutzouris ascends the verdant olive groves with sceneries of utmost serenity. The route is of great natural beauty with numerous architectural marvels including constructions from carved stone and grey limestone that form arched bridges, tunnel entries and retaining walls. On the final approach towards Milies, the scenery will take your breath away, especially after the crossing of the steel bridge of Taxiarhis, else known as De Chirico’s Bridge, a rare occasion where a train crosses a bridge that is straight and the tracks that lie on it are actually curved!

The Artist with the Little Train of Pelion

“… Giorgio De Chirico was present during the construction works that inspired him to use a miniature train silhouette, hidden behind walls and arches, in his painting, much like a child’s “spying” gaze into the adult world…”

The legendary steam train of Pelion was the project of Evaristo de Chirico, an Italian engineer who lived in Volos, and his father was the famous artist Giorgio de Chirico. The mastermind behind the development of the train was Evaristo whose combination of imagination and knowledge brought this magnificent project to life. The construction of the railway began late in 1894, and the first section from Volos to the village of Lehonia was completed in a period of one year. By 1903, the railway line had been extended to the village of Milies, covering a distance of 29 kilometers. The final outcome of this project created one of the most beautiful masterpieces of De Chirico family; bridges, the rail track and the train itself were inspired works that blended in the dreamy landscape of Pelion just like they have always been there. 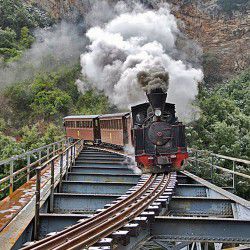 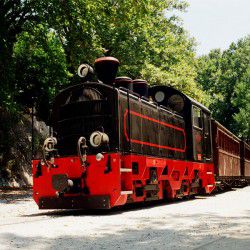 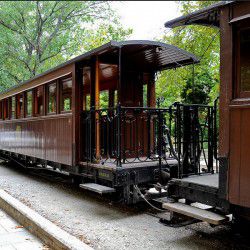 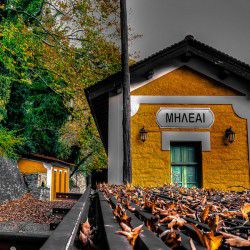 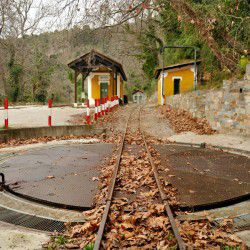 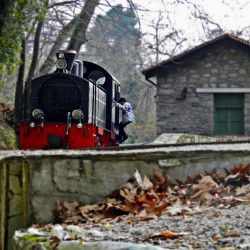 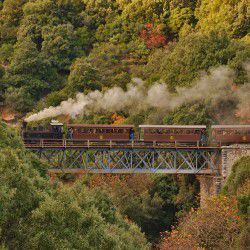 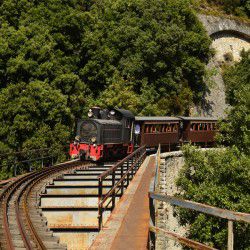