Mysterious Greece » Pelion » Made in Greece

Pelion peninsula is famous for its immense natural beauty where the sea and the mountain coexist harmoniously creating magnificent sceneries. This magical landscape is adorned with the picturesque villages that distinguish for their unique architecture, which complete Pelion authenticity with their own distinctive beauty.The architecture of Pelion is considered to be one of the most intriguing in Greece, recognized mainly in traditional houses and mansions, charming churches and stone fountains, bridges and cobblestone alleys.Traces of the history of Pelion are stamped on the ruins of ancient cities, the remnants of medieval castles and monuments of Christian basilicas. From the 12th century, Pelion emerges as a monastic place owing to the majority of the monasteries constructed on Pelion Mountain from monks of the “Agion Oros”. With the passage of time, new settlements were set up as the population moved to the seaside regions in order to create towns and villages. By the end of the Ottoman Empire, Pelion experienced great economic growth and cultural development, signs of which were found in the construction boom of that era. A rising number of mansions and houses were constructed utilizing elements of the urban architecture of the era while maintaining fortification defensive projects, a combination that made the unique Pelion architecture tradition, used till the present day. It is no coincidence that the villages of Makrinitsa, Pinakates and Vizitsa have been declared as preserved villages of absolute protection with a Presidential Decree.Today, many of these mansions have been renovated and operate as guesthouses, offering modern amenities with luxury notes, in an authentic setting and stately atmosphere. Having maintained their original character, these mansions could be described as museums, as they offer a picture of a bygone era of nobility and nostalgia.

The residential Pelion architecture can be divided in three great periods, through three centuries of building activity spanning from the 18th until the 20th century. The first architectural period, known as the period of prime Pelion architecture, marks the period of creative pretreatment where houses were built in the middle of the 18th century. Towers were built influenced from chateaus of Turkish landlords of Thessaly and houses with three or four floors were constructed with stone while the floors observe a mixture of stone and wood. Regarding the upper floor, there are wooden brackets with open or closed supported balconies known as “exostega”. The fortified construction, the double walls, the solid stone structure, the battlements, the few and small symmetrical windows, the elevated entrance and the balconies in the upper floors, supported from wooded struts are some of the characteristics of the houses of the first architectural period of Pelion. Towers of this period have survived until today. Typical examples are the tower of the Olympiou and Kokosli in Ano Lehonia and the towers Konstantinidi and Skotinioti in Makrinitsa. The second architectural period, known as the classical period Pelion architecture, marks the period of buildings influenced from the architecture of northern Greece, which were constructed between the middle of 18th and 19th centuries. Refugees from Epirus and Macedonia who found shelter in Pelion started building mansions, as they knew the art of construction, so they influenced the local architecture. During this period, the majority of mansions feature two or three floors and a stone base forming a right and vertical angle while construction is reminiscent of the early towers. The houses have specially designed areas for various uses. The ground floor, known as “Katoi”, had few tiny windows and thick stonewalls that kept a low and steady temperature, as the ground floor was used as a storage space. Above, the first floor, known as “Mesopatoma”, had a low celling and fireplaces, as it was utilized for winter stay. The upper floors were constructed with a lightweight material called “Tsatma”, as they were used for summer stay featuring the main entrance and many big windows. In this floor was the “Doxato”, a large pace that occupies the façade and communicates with the rest of the rooms as well as the “Kalon onta” used as the main reception area. The roof was covered with Pelion slates in order to protect the building from various weather conditions. The interior of the houses and mansions had rich decorative paintings, wood carved doors and cupboards while the external decoration had decorative motifs, stone reliefs and inscriptions. The Topali Mansion (1844) in Makrinitsa, which is now used as a folklore museum, is the most characteristic building of the second architectural period of Pelion. In 1985, the mansion was characterized as a work of art and a historical monument. The third architectural period, known as the late period Pelion architecture, marks the appearance of monumental neoclassical buildings constructed from repatriates of Egypt in a period of thirty years between 1860 and 1890. During this period, modern and innovative structures are built featuring academic elements, influenced from Egyptian architectural forms of that era; consequently, this period also marks the transition from traditional to neoclassical architecture. The mansions of the third architectural period have two or three floors decorated with simple lines, marbled details and perfectly symmetrical faces. Elaborate wooden doors, metal fenced balconies, big and symmetrical windows and large stairs complete the construction type of this era. Distinctive architectural examples of the third architectural period include Kantartzi and Tsopotou Mansions in Portaria, Hatziargiri Mansion in Alli Meria and Xiridakis Mansion in Tsagarada.

These superb buildings impress with their beauty, and provide a distinctive sample of architecture that has maintained the identity of Pelion unchanged over time. The majority of Pelion mansions are built with stones and slabs extracted in the mines of Pelion peninsula. Other buildings belong to the early stage of Pelion architecture, in which the buildings have three floors where the base is always built with stone while the upper floors are built with stone and wood. On the ground floor, there is a grand and impressive doorway while the windows on this floor are usually very small. The upper floors are more naturally lit, with large windows all around the building. The roofs of the mansions are always covered with the famous Pelion plates, always colored in gray tones. Most mansions belong to the architectural type of Northern Greece, which was developed in the Ottoman period, when refugees from Epirus resorted to Pelion. These people were craftsmen in stone and building, and they created most of the churches in Pelion, stone arched bridges, the cobble stone paths and the buildings. Furthermore, there are also mansions that belong to the neoclassical type brought in Pelion from expatriates in Egypt, with distinctive characteristics including simple lines and large symmetric windows, armored balconies and marble details. All of the traditional mansions of Pelion have impressive decoration on the outer side of the building with stone corbels or wooden struts, ornate wooden doors, marble staircases and multicolored skylights. The inner side of the mansions have also a distinctive decoration with wooden and woodwork ceilings while the residents of Pelion mansions used to decorated their homes with beautiful furniture, carpets, paintings, frescoes and antiques.Many of the houses have also large gardens filled with colorful flowers and plants as Pelion is famous for its rich vegetation and fertile territory.

Except the superb Pelion houses and mansions that impress travellers with their beauty, scattered religious monuments distinguish for their distinctive architecture. Priests, monks and local craftsmen dedicated their life to cosntruct and decorate these holy places; the wonderful construction of the exterior part in combination with the impressive decoration of the interior part of these temples will travel you to the glorious past of Pelion. The majority of these churches and monasteries are decorated with amazing iconostasis, inspiring murals and extraordinary engravings. A genuine sample is Agia Marina Church in Kissos village with its gold plated iconostasis and its inner domes! However, there are many other samples of the religious architecture of Pelion including Agia Kiriaki Church in Zagora with its golden inner gate, Agios Georgios Church in Agios Georgios Nileias with its impressive stone bell tower and its old stone reliefs and the three aisled basilica of Agion Apostolon Church in Argalasti with its grand marble bell tower.

What will intrigue you the most, however, are the hundreds of fountains scattered in the picturesque villages of Pelion. These stone marvels constitute an impressive detail of Pelion architecture constructed with love and care from local craftsmen. Pelion fountains are usually found in the squares, the churches and the cobblestone paths of Pelion; they are small scale structures dating from the late 18th and especially in the 19th century. These beautiful fountains had a strong social interest, since they were used as the place where women met, where disputes were held and where relationships were developed. It is quite important to state that all of these stone fountains are connected to myths, traditions and legends. Their names originated from the owners that funded their construction (Mourogianni in Ano Lehonia), various events that took place at the point (Horeftria in Koukourava), and properties of the water (Immortal Water in Makrinitsa). Pelion fountains are classified in two categories; the simple fountains and the roofed fountains. The simple fountains have stonewalls featuring a single or double arched recess at the center of which a spout in a handful shape exists, from where the water flows. The fountains’ floor is either built or placed on the pit (“gouva”), used for animal drinking or cloth washing while the exterior is completed by engraved signs that state the owner and the date of construction. The roofed fountains have an elaborate construction, as they have a square plan as a wooded roof covered with slabs in order to offer shade. Two stone pillars or columns or wooden stilts join the plan with the roof and support the latest by a stone wall, to which are the water spouts in handful shape. Distinctive samples of roofed fountains are the stone fountain “Mousga” in Vizitsa (1888) and “Sevastous” in Zagora. 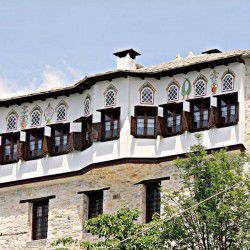 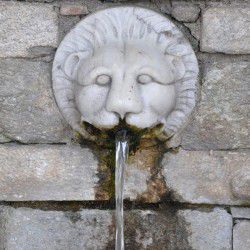