December 24, 2016
Corfu town’s top 3 buildings: Mansions with a mysterious past

Corfu is an island that has seen many conquests through the centuries, with each leaving its own distinct mark on the town’s appearance, as well as contributing to the cultural diversity that is aplenty. The Venetians, the British, the French and the Austrians all had their time in Corfu, not to mention the Barbarian and pirate raids during the 4th century. All this conquest activity left in its wake some truly impressive structures: grand buildings and glamorous mansions, imposing palaces and fortified castles, extravagant manors and elegant villas. Corfu old town has it all! And if their walls could talk, they would tell a million stories…  There are very few places in the world that gather so many grandiose buildings, and in such close proximity to one another; this ‘emerald island’, the cosmopolitan Corfu is one of them. Here, we take a closer look at the top 3 most impressive buildings and touch upon their glorified past.

Built in 1819 using Maltese limestone, this sizeable Royal or City Palace, as it is locally known, features elements of Georgian, romantic classicism with neo palladianism in its architectural style. To this effect, the outdoors are awe-inspiring: a wide facade, intricately decorated with relief metopes, further adding to the opulence factor. A lovely garden welcomes you with a fountain in its centre that serves as a pedestal for the bronze statue of Sir. Frederic Adam, in honour of him supervising the town’s aqueduct construction (and later to become the next Lord High Commissioner of the Ionian islands). Ιonic and Corinthian style columns frame the interiors, with its walls decorated with frescoes of scenes from the Odyssea, and a splendid staircase leading up to the first floor. It boasts 3 main halls: a ballroom, a throne hall and a banquet hall. Intended as the residence for the British Lord High Commissioner at the time, Sir Thomas Maitland, it was also the original home of the Order of the Knights of St. George and St. Michael, a British order of chivalry related to achievements of the Napoleonic Wars. Some of its other purposes included becoming a summer residence for the Greek royal family, housing the Ionian Republic Senate and being the venue for a European Summit. Today visitors can admire not only the exteriors of this beautiful palatial structure, but also the interesting exhibits of the interiors. Now the proud host of the Museum of Asian Art, the Department of classical antiquities of Corfu and the works of Corfiot artists from the 19th century plus other temporary exhibitions, it is also a municipal library. Having survived WWII and the Greek Civil war, albeit with some damage to the structure, the Palace still emits a grandeur that is unmistakable. 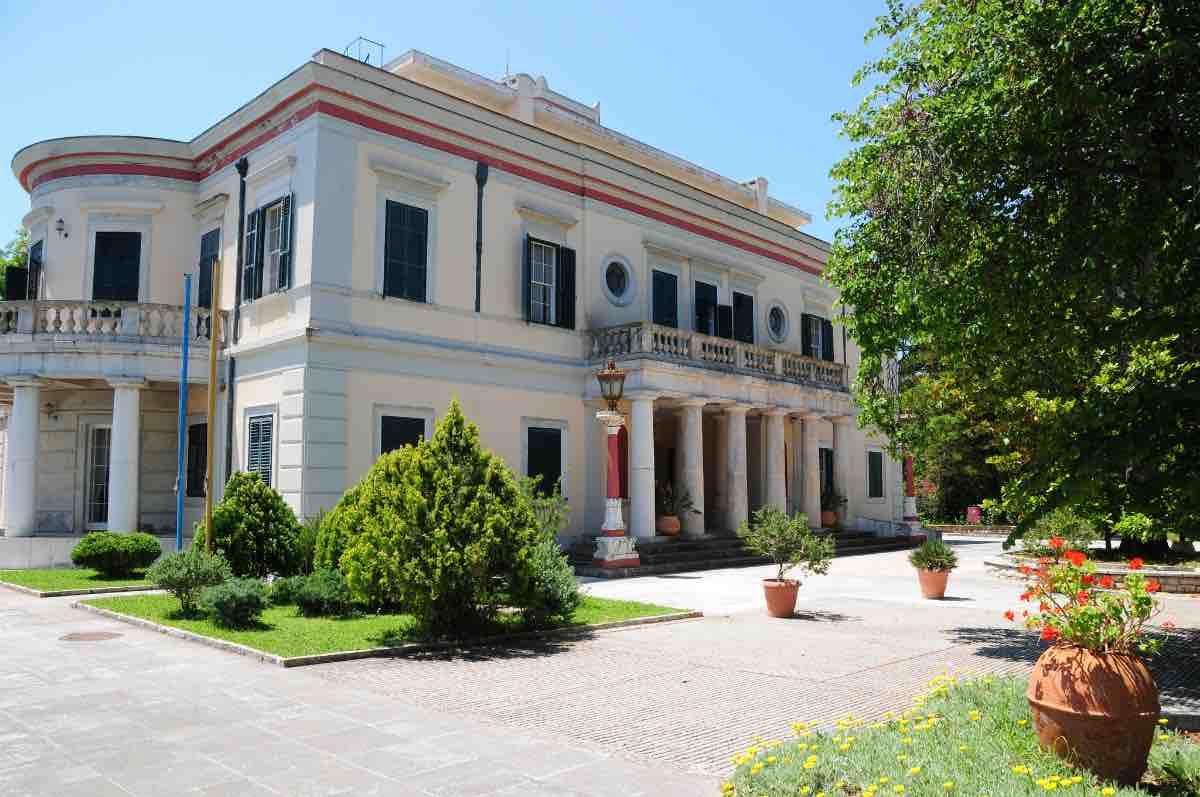 A summer residence for the Lord High Commissioner of the Ionian islands, Sir Frederic Adam, the Mon Repos mansion was constructed in 1828 in the old town’s southern area, opposite the forest of Palaiopolis (Corfu’s ancient city of ruins). The prime location of this mansion offers wonderful, refreshing views of the old town landmarks, and today it also overlooks the same name Mon Repos Palace Art Hotel that has been designed with the original mansion in mind. Apart from the elegant interiors that are fit for royalty, the mansion’s bountiful exteriors are an attraction point in themselves, as the grounds contain ancient Doric temple ruins and the infamous Heraneum (in honour of goddess Hera) that dates back to 7th-4th centuries B.C. Only used by Sir Frederic Adam and his Corfiot wife until 1832 before relocating to India, Mon Repos mansion underwent through a number of changes in use over time. In 1833 it became the school for fine arts, while it’s beautiful park was opened to the public the following year. In 1863, it welcomed the Empress Elisabeth of Austria, or more commonly known as the loved Princess Sisi, who became completely infatuated with the island of Corfu during her stay there, giving her motivation to later build the Achilleion Palace in the 1890’s. Following the Ionian islands’ union with Greece in 1864, the mansion was given to Greece’s first king, King George I of the Hellenes, and the royal family until 1967 when King Constantine II fled Greece, prior to the military junta regime taking over. During this period, the Mon Repos mansion witnessed two royal births, the first is that of current British royal consort, Prince Philip Duke of Edinburgh, spouse of ruling Queen Elizabeth II, Prince of Greece and Denmark at birth in 1921, and Princess Alexia of Greece and Denmark in 1965. 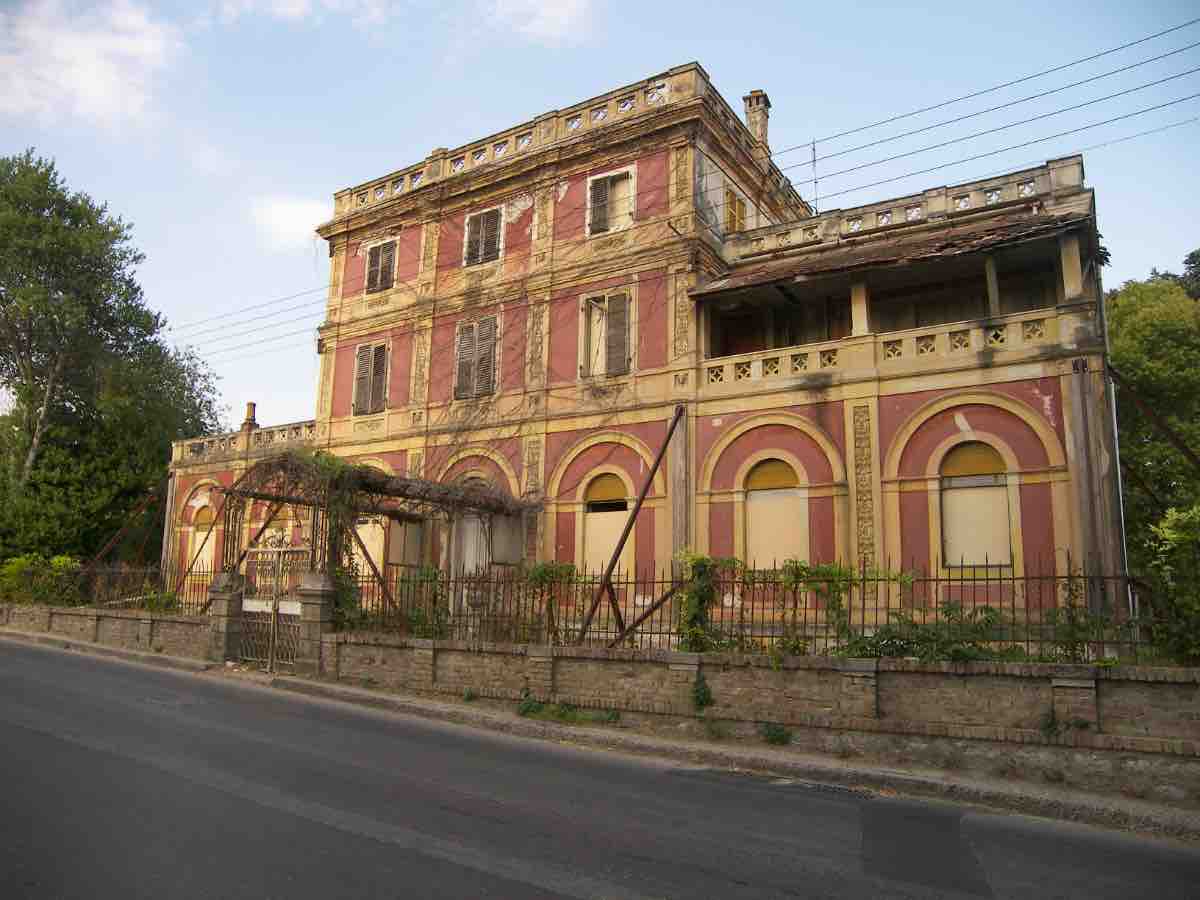 One of the private family residences that contributed to Corfu’s cultural and social salience. Built in 1864, this red villa, or Villa Rossa is a most peculiar villa of artist Nikos Aspiotis. Inspired by Italian neoclassical design and British functionality, Villa Rossa boasted 24 rooms that have seen days when the lavish halls vibrated with laughter, song and dance. The Aspiotis family were innovators and benefactors of Corfu, and their deluxe villa was a point of social gatherings, the exclusive guestlist of which included members of the royal family and other distinguished people. Enveloped in beautifully verdant gardens that used to house a tennis court among other gaming activities, the exteriors now show little signs of these past days of grandeur. They are still primarily red, although worn down and sallow, as the villa (barely) stands, in absolute dereliction. Villa Rossa’s ownership was passed from the Aspiotis family to the Greek state in 1997 which essentially sealed the villa’s fate, enter a decade of complacency. Now, the once glamorous Villa Rossa has broken shutters and windows all around, ruined ceilings, shattered tiles and flooded basements while the intricate, wooden detailing that once covered the interior’s columns and mantelpieces, falls apart daily. The quality craftsmanship found in its leather furniture items and velour tapestry lays in line to rot, making Villa Rossa the saddest story to be contained within …four walls.

Architecture
Back to blog >>