The Greek Islands is a neverending world of destinations. For your bucket list.

1. Poros: Characterized as the Bosporus of the Saronic Gulf, this Greek islands entails a bunch of astonishing sceneries. 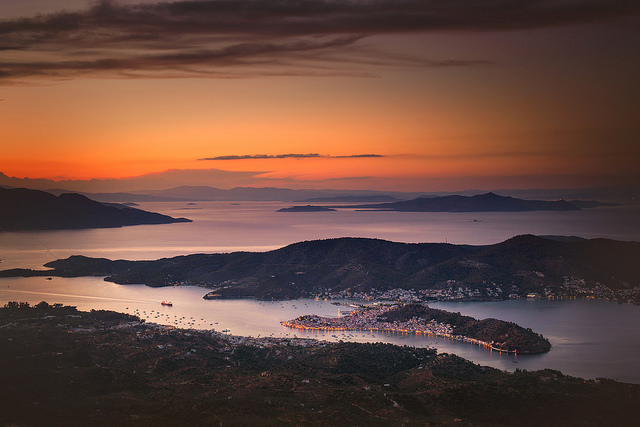 The view of Poros island as seen from Aderes mountain ©️ Eugenios X.

Situated just one hour away from Piraeus, the main port of Athens, Poros is an excellent escape for weekenders. This island has the privillege of being not so popular, the reason why travellers will enjoy utmost moments of serenity.

Its peculiar morphology lies in the fact that Poros is built on two isles of various geological formations connected through a thin strip of land. In fact, Spheria and Calabria were formed following the great eruption of Methana volcano!

Perched on a hill, the town of Poros unveils a lovely village decorated with amazing neoclassic buildings and traditional houses. A maze of cobblestoned alleys will let you explore bits and pits of the genuine island character of this island. The views from the bell tower , which is built on the highest spot of Poros, are just spectacular, no one should miss it!

The LOVE BAY is considered to be one of the most beautiful beaches in the Saronic Gulf. Turquoise waters encircled from verdant vegetation will offer to explorers an unforgettable experience!

Re-constructed from Carl Wilhelm von Evdek, a famous Bavarian philhellene, the BOURTZI CASTLE is situated on the east entrance of Poros island. Bourtzi played a vital role in the munity of Miaoulis, a great hero of the Greek War of Independence, in 1831, who achieved to capture the fort in order to control the artillery of the strait.

Characterized as the most important religious monument of Poros, ZOODOHOS PIGI MONASTERY was founded from the Archibishop of Athens, Iakovos, in 1720. It is situated in a splendid location amidst pine trees. It is worth mentioning that the monastery helped financially the freedom fighters during the Greek Revolution.

Situated on Calabria area, the RUSSIAN NAVAL BASE is an architectural landmark of great historical importance. It is a symbol of the military collaboration of Russia and Greece during the 18th and 19th century. Historical fact is that the Russian  Naval Fleet assisted Greece during the war with Turkey.

2. Anafi: The satellite island of the world-famous Santorini reveals wild sceneries at the edge of the Cyclades 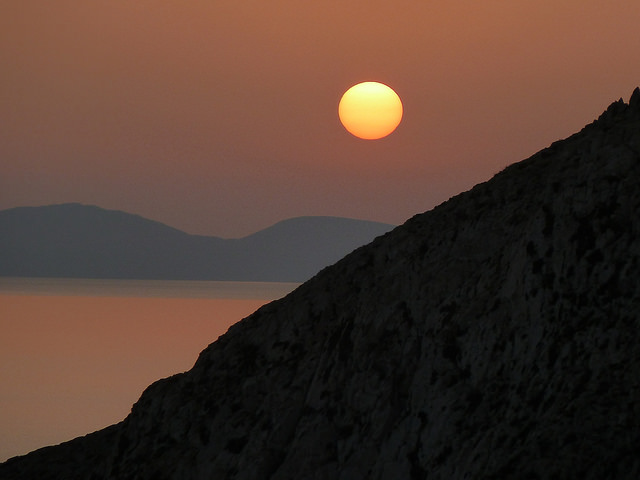 Characterised as the Gibraltar of the Aegean, Anafi is one of the smallest islands of the the Greek Islands and the Cyclades.  Mythology has it that this tiny island emerged from the sea so as to offer a shelter for the Argonauts during their return journey from the Golden Fleece.

Isolated at the edge of the Cyclades, Anafi is a genuine Cycladic island with the idiomorphic architecture of this region. Whitewashed houses, labyrinthine alleys and fuschia bouggainvillea will unveil to the travellers the genuine spirit of its finesse.

The most fascinating fact about Anafi is the gigantic Kalamos cape,  the second largest monolith of Europe only after GIBRALTAR. Nonetheless, the entire island, which is no more than 38 square kilometers, is dotted from a  rocky  terrain of limestone and granite as overlaid from the great eruption of Santorini – previously known as Strongyli island.

ROUKOUNAS BEACH is the longest beach of Anafi. Oftenly characterised as one of the most beautiful beaches in the Aegean Sea, Roukounas is an ideal destination for those searching for isolation and seclusion.

A stroll around HORA OF ANAFI is a must! A genuine specimen of the Cycladic architecture will guide travelers though the ecstatic views to the Aegean.

Hiking/Climbing to PANAGIA KALAMIOTISSA OLD MONASTERY holds the first position in the to-do list for Anafi. Perched on Kalamos Rock, the monastery consists of a single room with interesting architectural style. Although the path is quite difficult, the view will reward you! Keep in mind that entry to the monastery is only possible with prior arrangement.

Scattered through Anafi’s countryside, KATIKIES are secluded stone farmhouses that played a vital role for the island’s rural economy. Some of them are inhabited even today!

INSIDER TIP: No one should miss the exhilarating view from the Old Monastery of Panagia Kalamiotissa perched on the edge of Kalamos Cape. Can you imagine staring at the most stunning sunrise of the Eastern Mediterranean Sea?

3: Arki: A miniature archipelago off the coast of Asia Minor 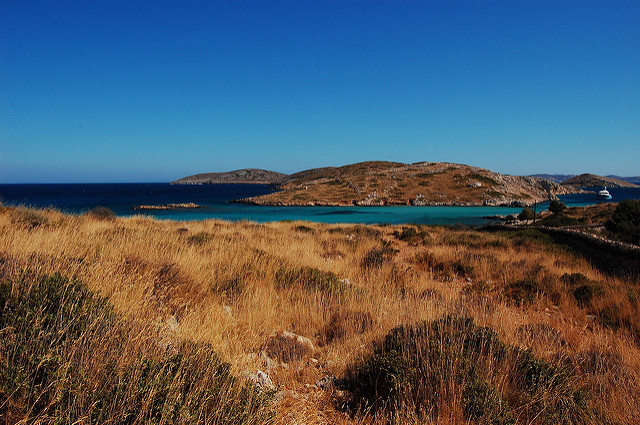 Unquestionably, Arki is a divine escape. One of the most unknown Greek islands.

In fact, the entire island of Arki has been declared as an important area from the European Network of Natura 2000.

As they say, expensive perfumes come in small bottles…

Be advised, the main points of interest of Arki is Mother Nature herself. Other than that:

The CASTLE OF ARKI was built from a colony of Miletus during the 4th century BC. It was later reconstructed from the Byzantines.

On the northern side of Arki, travellers will have the opportunity to explore REMNANTS OF A BUILDING probably constructed from the Italians.

Close to Halaro region, the VOTSI CAVE can be found. In that cave, the inhabitants of Arki found a safe shelter during the German bombardments.

No one could ever forget the PANAGIA PANTANASSA CHURCH that celebrates in honor of the Virgin on August 23.

INSIDER TIP: Tiganakia is the most beautiful beach of Arki. Don’t miss it!

4. Fourni: An island used as a shelter from the pirates of Corsica 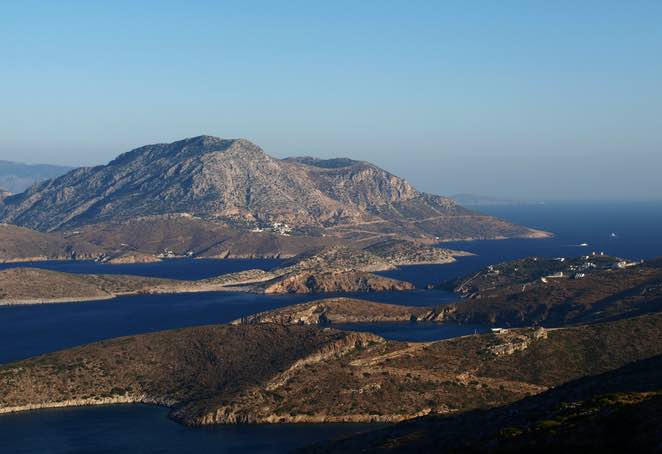 Fourni is one of the remotest Greek islands. A cluster of tiny isles and deserted rocks reveals another spirit in the chapter of the Aegean Sea.  Fourni’ archipelago.Fourni’ microcosm consist of Agios Minas, Alatonisi, Anthro, Kedro, Thymainaki, Kisiria, Makronisi, Petrokaravo, Plaka, Plakaki and Strogilo and the inhabited islands of Fourni and Thymaina.

Fourni served as one of the most important bases of operation for the pirates of Corsica who invated the Aegean Sea during the Middle Ages. The pirates took advantage the exclusive morphology of Fourni that consists of hundreds of small fjords and hidden bays where the ships could hide. This is the main reason that Fourni used to be called Coresoi Islands, after the pirates of Corsica!

Those looking for a secluded destination, search no more. Fourni is the right place for you! Secluded away from the rest of the world, the life pace on this island has an inimitable tranquility aura. Hospitable people, picturesque bays, traditional houses and pristine beaches await avid travellers to experience the other side of the Greek summer.

KAMBOS is the main settlement of Fourni. Situated on the west part of the island, the life of the village centers around the main square with the plane tree.

Wander around CHRISOMILLIA SETTLEMENT; the southern peninsula of Fourni unveils a series of spectacular beaches.

The ANCIENT MARBLE QUARRIES OF PETROKOPIO used to supply with marble many Mediterranean cities including Ancient Miletus. Archaeological excavations brought to light traces of the ancient quarry. Explorers should visit Petrokopio beach because they will be able to witness traces of chunks and gravel of marble just above the beach.

A trip to THYMAINA ISLAND is a must! Travellers can visit Keramidou beach and the chapel of Agios Dimitrios for its panoramic views. Don’t miss the delicious seafood at the seaside taverns!

INSIDER TIP: Fourni hosts one of the largest fishing boat fleet in the Aegean, so it is highly advisable to taste the fresh fish at the seaside taverns of the three villages!

5. Samothrace: Intoxicating sceneries and imposing waterfalls on thesacred island of the Great Gods 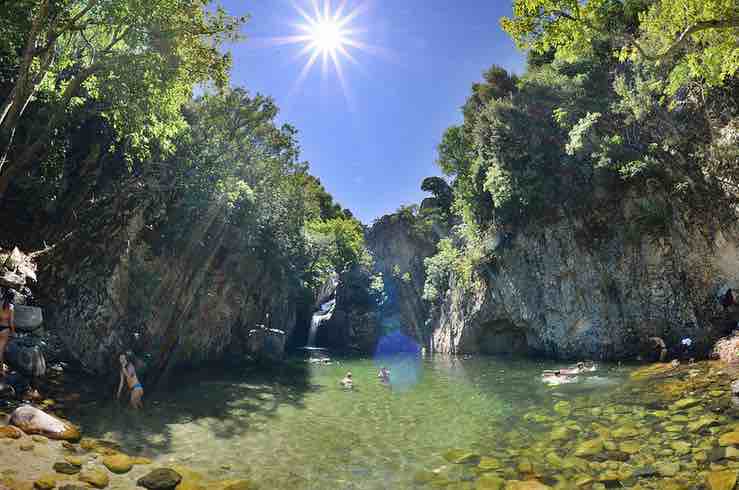 Mythology has it that Poseidon observed the War of Troy from the grand arc of the wild ridge of Fengari (Moon), the highest spot of Mount Saos. Once upon a time, on the land of the most important religious center of Ancient Greece, the Cabirian mysteries took place, which were highly regarded and respected from the entire world in the Mediterranean.

Motherland of the Wings of Victory, one of the main exhibits of the Louvre Museum in Paris, Samothrace is blessed with landscapes of extreme wild nature. One of the most beautiful Greek islands. Lush canyons, gigantic waterfalls, flowing springs and the constant view to the endless blue of the Aegean Sea. It is a fact that Samothrace is a favorite destination for adventure aficionados and nature lovers. Why shouldn’t it be?

Declared as a preserved traditional settlement, HORA is the capital of the island. The village stretches between the mountain slopes of Saos. It is a lovely settlement that has managed to preserve its traditional character. Worth visiting sights include the Church of the Assumption of Virgin Mary, the Folklore Museum and the traces of the Castle of Gateluzi.

The SANCTUARY OF THE GREAT GODS is one of the most important archaeological sights of Greece. Situated off the ancient town of Paleopoli, the sanctuary served as a worship place of the Cabirian mysteries in hobor of the Great Gods.

It is a must to visit PROPHET ELIAS VILLAGE for its astonishing sunset views. This settlement is known for the delicious “stuffed goat” traditional dish of the island.

INSIDER TIP: Swimming in the Vathes (lakes formed from the waterfalls) is a must! The famous lakes reach the waterfalls and rivers of the island.This is perhaps the most unique experience of Samothrace!; the easiest accessible Vathres begin from the Vathra of Fonias and Gria Vathra. Greek islands

Discover five Greek islands off the beaten track. The Greek archipelago is a neverending world of destinations; for your bucket list.