From the prehistoric times, Greece has marvelled with its cultural masterpieces, many of which have been included in the World Heritage List of UNESCO.

Below, you will find our selection for 4 of the best UNESCO World Heritage Sites in Greece!

1. The Acropolis: A Universal Symbol of Classical Greece 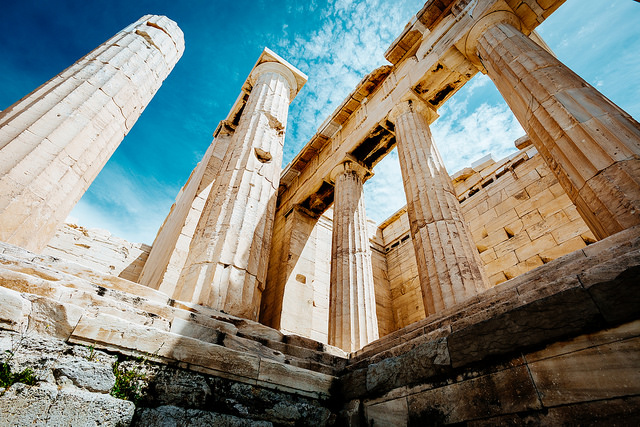 View of the Parthenon © Robert Anders

Proclaimed as a UNESCO World Heritage Site in 1987, the Acropolis of Athens is a niversal symbol of the classical spirit of the Greek civilization.  The spellbound monuments of Ancient Athens dominate at the city centeron the glittering rock known as The Acropolis.

This sacred temple complex is connected to the most celebrated myths of ancient Athens, its religious festivals and sophisticated rituals. The monuments of the Acropolis stand in harmony with their natural setting, as unique masterpieces of classical architecture that have influenced art and culture for many centuries.

The Acropolis, made on the 5th century BC, is the most accurate reflection of the wealth of Athens at its greatest glory, the Golden Age of Pericles.

UNESCO’S DESCRIPTION: The Acropolis of Athens and its monuments are universal symbols of the classical spirit and civilization and form the greatest architectural and artistic complex bequeathed by Greek Antiquity to the world.

INSIDER TIP: Pendelikon Mount is one of the three mountains of Attica. Ever since antiquity, Pendelikon was famous for its flawless white marble that was used for the construction of the Acropolis. The ancient quarry of Pendelikon is protected from the Greek law, as it is used exclusively for the Acropolis Restoration Project.

DISCOVER: More information for the Acropolis of Athens.

2. Delphi: The Famous Navel of the World 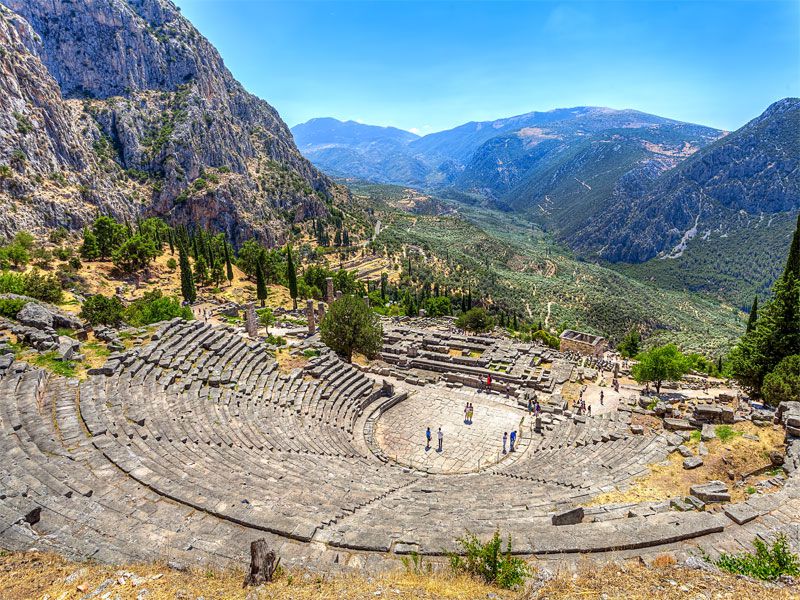 The Theatre of Delphi was one of the places where the Pythian Games took place every four years.

Characterized as the navel of the world, Delphi is the famous oracle of Ancient Greece located at the foot of Mount Parnassus.

Designated as a UNESCO World Heritage Site in 1987,the sanctuary of Delphi is set in one of the most specular landscapes of the country that was chosen from the two eagles sent out from legendary Zeus from the end of the universe to find the navel of earth.

Delphi served as the cultural and religious center of the Hellenic world for many centuries, as its history begins from Greek mythology. The sanctuary was constructed from the Cretans who arrived at the port of Kirrha.

The earliest findings of Delphi, which include traces of a Mycenaean cemetery and settlement, come from the cave of Korikion Andron that date back to the Neolithic period.

The Great Excavation of Delphi began from the French School of Athens in 1891, which uncovered spectacular traces for our knowledge of the life in Ancient Greece. Today, only the Treasury of the Athenians had enough of the original building material preserved while the Chiot Altar, Apollo’s and Athena’s Sanctuaries, Delphi’s Ancient Theatre, the Sacred Way, the Gymnasium of Delphi, and the Tholos of Athena Pronaia have been partially restored.

UNESCO’S DESCRIPTION: The pan-Hellenic sanctuary of Delphi, where the oracle of Apollo spoke, was the site of the omphalos, the ‘navel of the world’. Blending harmoniously with the superb landscape and charged with sacred meaning, Delphi in the 6th century B.C. was indeed the religious centre and symbol of unity of the ancient Greek world.

INSIDER TIP: The European Long Distance Path E4 crosses the west slopes of Parnassus Mountain at the 51st kilometer, the highest point of Lamia – Amfissa Highway. Then, the route passes under the summit to the village of Agoriani and goes down to Delphi. Just above Delphi, E4 merges with the Ancient Path used from pilgrims in antiquity to visit the oracle of Delphi. 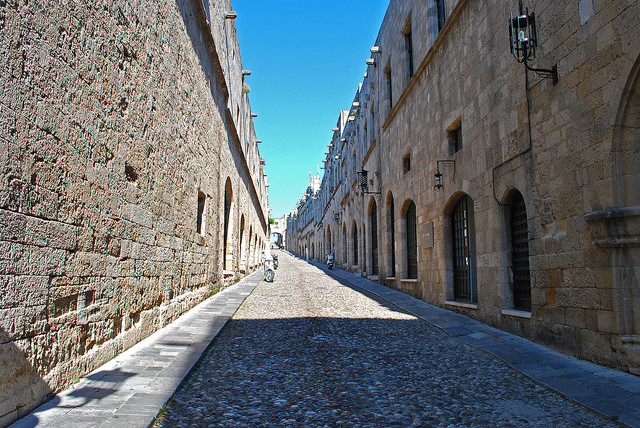 Rhodes Medieval Town is a mosaic of crossroads of different cultures and civilizations from twenty-four centuries of history with a unique atmosphere that creates sceneries of indescribable beauty of one of the best-preserved medieval settlements of Europe.

It is the jewel of Rhodes island and one of the largest medieval cities of Europe that was proclaimed as a UNESCO World Heritage Site in 1988.

The magnificent Palace of the Grand Master was the administrative quarters of the Knights of Saint John along with cobblestone Street of the Knights, one of the most well preserved medieval streets of Europe, create a mesmerizing feeling of medieval times. An abundant number of magnificent buildings including the Hospital of the Knights, the Orthodox Cathedral of Rhodes, the Hippocrates Square and the Turkish baths and mosques create the medieval image of the Old Town of Rhodes.

Rarely someone has the opportunity to stroll around the alleys of a medieval old town.

UNESCO’S DESCRIPTION: The Order of St John of Jerusalem occupied Rhodes from 1309 to 1523 and set about transforming the city into a stronghold. It subsequently came under Turkish and Italian rule. With the Palace of the Grand Masters, the Great Hospital and the Street of the Knights, the Upper Town is one of the most beautiful urban ensembles of the Gothic period. In the Lower Town, Gothic architecture coexists with mosques, public baths and other buildings dating from the Ottoman period.

INSIDER TIP: Within the premises of the Grand Master Palace, visitors will have the opoortunity to visit the Byzantine Museum of Rhodes. 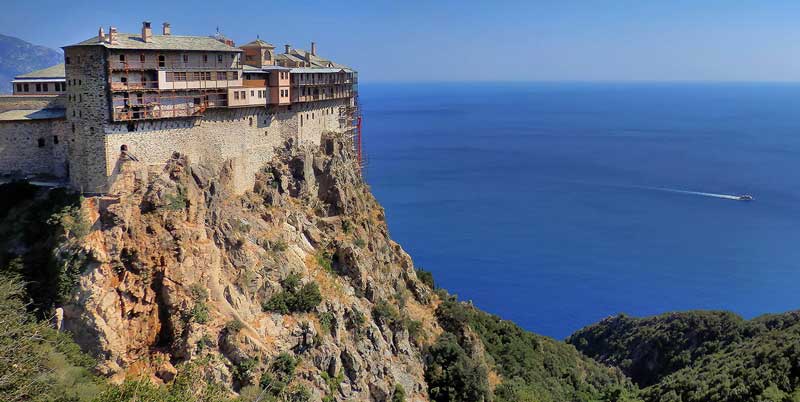 Officially known as Ayion Oros, Mount Athos is a self-governed part of the Greek State, administrated by the Ecumenical Patriarch of Constantinople, which has been included in the World Heritage Sites List of UNESCO since 1988.

Mythology has it that Giant Athos threw a massive rock to god Poseidon that fell into the sea and became Mount Athos during a fight between the Gods and the Titans. Another legend, however, says that Virgin Mary’s hip was blown and docked on the peninsula of Athos while on her way to Cyprus; she was so amazed from the beauty of the peninsula that she blessed it. Subsequently, Mount Athos is called the Garden of Virgin Mary.

Mount Athos, the Autonomous Monastic State of the Holy Mountain, consists of twenty Orthodox monasteries standing on the eastern peninsula of Halkidiki.Seventeen monasteries are Greek while the other three are Serbian, Bulgarian and Russian. Apart from the monasteries, there are twelve communities of monks and many solitary hermitages.

The monasteries are rich storehouses of medieval history. You can see paintings from the 13th century AD, music manuscripts from the Byzantine era, marble sculptures of columns, turrets, chalices, icon screens and exquisite miniatures in gold and silver dating back to the 12th century. Approximately one quarter of all the Greek works in the world are collected there in the form of more than fifteen thousands books and handwritten manuscripts.

UNESCO’S DESCRIPTION: An Orthodox spiritual centre since 1054, Mount Athos has enjoyed an autonomous statute since Byzantine times. The ‘Holy Mountain’, which is forbidden to women and children, is also a recognized artistic site. The layout of the monasteries (about 20 of which are presently inhabited by some 1,400 monks) had an influence as far afield as Russia, and its school of painting influenced the history of Orthodox art.

INSIDER TIP: Women are not allowed to enter Mount Athos, only men. However, there are boat trips departing from Ouranoupoli and follows the western side of the peninsula. Although, female visitors are forbidden to enter the moansteries, the circumnavigation of the peninsula is a one-of-a-kind experience. Just spectacular!

Culture The Hidden Hinterland
Back to blog >>