Invading to the deep blue sea of the Aegean, the sheer volcanic cliffs of Santorini are embellished with a whitewashed splash of charming houses and picturesque churches with blue domes that compose a genuine natural phenomenon; layer upon layer of the reddish volcanic rock form an impressive spectacle of mother nature. Nowhere else on earth exist such an impressive scenery hosting human life! Although travellers get impressed from these landscapes of Santorini, they seem to disregard the story behind the creation of this masterpiece of nature. Are you ready to unveil the mysteries of the sleeping volcano?

“…Behind the present serenity of the Cyclades lies a turbulent past. They have been repeatedly ravaged by man and destroyed by nature. Drought, war, pirate raids, earthquakes and volcanic eruptions are some of the calamities these islands have suffered during their several thousand year old history, driving the inhabitants to desert their blissful homes. Santorini is, without a doubt, the most exotic, the most spectacular, the most sensational, the most beautiful and the most tragic of the Aegean isles.At the first crack of dawn the island resembles a menacing fortress with its sheer 300 meter cliffs hiding behind dark shadows amidst a sea which, according to Homer, resembles a deep red wine…Since the beginning of time Santorini has been tormented by geological upheavals: blasted from the sea, savagely torn apart and blown up again…” Professor Antonis Kontaratos 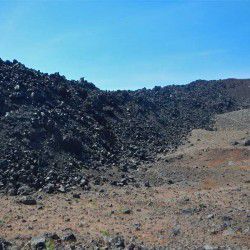 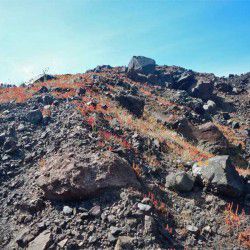 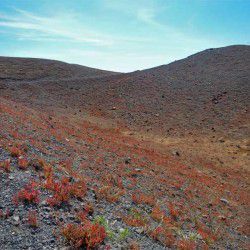 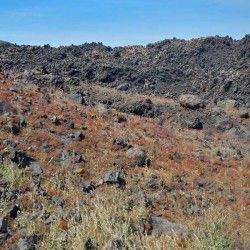 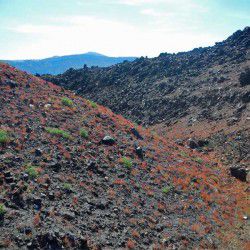 The Minoan Eruption & the Creation of the Five

Since the depths of time, Santorini was always recognized for her evocative character, her invigorating sceneries and her intoxicating sunsets; all of these were the result of the eruption of Thera, also known as the Minoan eruption, a major catastrophic volcanic eruption that took place in the second half of the 2nd millennium BC. Characterized as one of the largest volcanic events on earth in recorded history, the eruption devastated the island of Thera. The eruption caused huge tidal waves that destroyed the Minoan civilization of Crete located seventy miles to the southern part from the island. However, geologists have uncovered traces of this eruption as far as Anafi, Lemnos, Paros, Samothrace as well as the Nile Delta in Egypt.It’s no wonder why Santorini’s name has been recognized worldwide as one of the most beautiful places on earth; however, most of the people ignore the fact that Santorini refers to the island complex that comprises from Aspronisi, Nea Kameni, Palea Kameni, Thera and Thirassia, of which only the two isles are inhabited. It is worth stating that the official name of Thera was Strongili, which actually means circular in Greek. These five islands were created as a result of this major volcanic eruption. The Minoan eruption changed dramatically the geology of the island, as it used to have the shape of an almost complete ring enclosed from a shallower caldera before the eruption. Huge sections of the island collapsed into the emptied magma after the eruption when the caldera was significantly deepened and widened. However, the Minoan eruption also devastated significantly the economic center that Santorini was at that time; archaeological excavations brought to light an important Cycladic and Minoan town that that was buried beneath the volcanic ash for approximately four thousands years. Although it appears that people evacuated the island before the eruption, the findings in Akrotiri are quite impressive. This spectacular archaeological discovery has induced speculations that even relate the legend of the sunken Atlantis with the volcanic destruction of Santorini.

Hiking in Nea Kameni:An Experience of A Lifetime

Hiking in an active volcano is undoubtedly an experience of a lifetime. Can you imagine exploring the youngest volcanic crater in the world? Undoubtedly, hiking in the active volcano of Santorini is a bullet point for your bucket list, as it combines the most exciting elements of this island of the Cyclades; from sailing to the volcano and walking to the active crater to capturing images with your camera and visiting the thermal springs! And the journey begins! Starting from Fira, follow the cobblestone path that leads to the peculiar cliffs of the old harbour. It is one of the most spectacular routes of Santorini with astonishing views to the surrounding area. When you arrive at the port, pick you boat to sail your winds across the caldera and the volcano of Nea Kameni. Make sure you have your camera with you! An outstanding hike up over this dormant mountain is challenging enough; though it worth the effort for the breathtaking views. Its just twenty minutes for observing the almighty beauty of Santorini! Whether you choose to follow your guide or you decide to explore the volcano by yourself, it will be thrilling. Reaching the top, a miraculous 360-degree view of the entire island of Santorini emerges from every point of the caldera challenging you to choose which of all is the best. A mixture of brown, red and yellow colours arise all around the volcano creating an inimitable canvas of an unknown, yet legendary, artist, none other than Mother Nature. Although you may have heard about hiking to Santorini’s volcano , the feeling of experiencing it for yourself is one-of-a-kind. 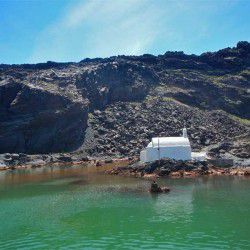 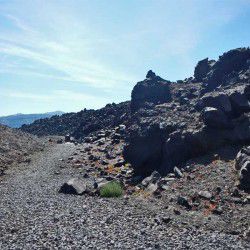 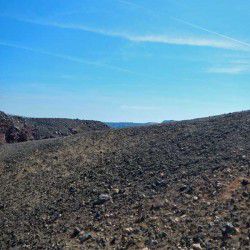 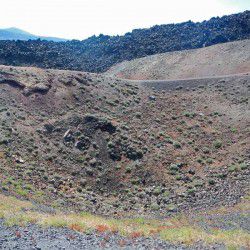 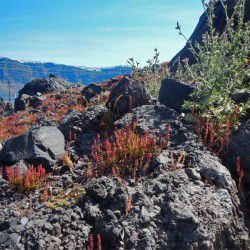 Up until today, travellers can observe the deposits of the Minoan eruption on the islands. The thunderous fury of nature left its legacy on this island of the Aegean, home to the last active volcano of Greece that still smolders since its last eruption in 1950. Who knows, someday the sleeping volcano may wake up again! Until then, it will be an experience of a lifetime to explore the bowels of the earth in Santorini! Are you ready to unveil the mysteries of the sleeping volcano of Santorini?

When you arrive at the Geological Park of Nea Kameni, don’t forget to get your free leaflet with information regarding the volcanic activity of the southern Aegean.

If you choose to visit the volcanic crater in summer, you must definitely wear comfortable shoes and your hat.

Of course, you should not forget a bottle of water!

In Palea Kameni, you can apply the mud on your body. Bear in mind that the smell and yellow color of sulfur will linger on your skin for a while.

Geological Information
Research made from geologists and volcanologists has proven that twelve cycles of volcanic activity have been detected in the last 200.000 years. More specifically:

• The south part of the famous caldera of Santorini was created from a huge eruption one hundred thousand years ago.

• Stroggili was fragmented in the eruption of 1.600 BC creating the north part of the caldera.

• The volcanic ash had been ejected a long distance and the magma of the eruption of 726 AD is found in the northeast part of Palea Kameni until the present day.

• In 1707, successive eruptions were the main reasons of the emersion of Nea Kameni.