Kalamata Papadimitriou is one of the largest food companies in Southern Greece. Three generations of Papadimitriou family have managed to evolve the knowledge and experience by creating innovative Mediterranean high standard products with great love and passion. Based on the nutritional value of the Mediterranean diet, the “Papadimitriou” products have managed to win the consumers’ confidence in both the domestic and international markets. With more than seventy years of experience in the processing of raisings, continuous activity in developing innovative products based on the Mediterranean diet, what made the difference was the first Greek balsamic vinegar under the name “Balsamic Vinegar Papadimitriou Kalamata”. Konstantinos Papadimitriou was the inspirer of this idea.  The balsamic vinegar of Kalamata Papadimitriou was officially released commercially in 1998. This unique product derives from the Corinthian currants, which have a natural dark color, an ideal raw material for the production of balsamic vinegar, since it has no preservatives and caramel unlike the vast majority of Italian, tha major competitor of Kalamata Papadimitriou. However, what is really interesting, is the story behind the story of Papadimitriou family. It all started in 1939, when 29 year old Christos Papadimitriou created a small production unit in order to export local products including dried figs, Kalamata olives and olive oil. Over the years, the small business grew bigger, and Papadimitriou family specialized in a more special local product, that of the Corinthian raisins. Up until the 1950’s, the Papadimitriou managed to penetrate one of the most difficult and demanding markets of Europe, that of Great Britain, with this unique product. The transfer and expansion of the factory were the prerequisites for this successful new venture. Through time, by focusing on the raisin and acquiring expertise on this product, Papadimitriou family expanded into new markets including Germany and the Netherlands. At that time, Christos Papadimitriou was the ambassador for the promotion of Greek products abroad. During the 1970’s, upon the completion of his studies in the famous college of Oenology in Bordeaux, his son, Kostas Papadimitriou, returned to the city of Kalamata. He worked for the company in order to evolve it further by consolidating its position abroad as one of the major export businesses in raisins. Kostas managed to export raisin-ready-to-buy in consumer packaging to the demanding British supermarket chains. Until then, the packaging was exclusively done in Great Britain. A decade later, the factory moved to its modern premises, in Thouria of Messenia. By the 1990’s, Kostas Papadimitriou, by combining his entrepreneurial talent and studies, he created a unique product: the “Balsamic Vinegar Papadimitriou Kalamata”. Based on the traditional local recipe for sweet vinegar, namely “Glykadi”, he produced, exclusively from grape natural sugars and colour, the first Greek balsamic vinegar. Since then, the company annually produces 2,400,000 bottles of balsamic vinegar, and the aim of Papadimitriou family is to expand and further penetrate the air catering at major airlines and produce new products. From 2004, the time when the business was undertaken from the third generation of the family, brothers Christos and Dimitris Papadimitriou radically renewed the company’s’ products. They launched a fresh design and a new range of innovative products based on Mediterranean Balsamon ® vinegar, for which they are famous. Spicy mustards, aged balsamic vinegar in a wide variety of flavor and textures, extra virgin olive oil PDO Kalamata, velvety cream balsamic vinegar, and a series with dried fruits, while its latest creation is the cream of balsamic. By 2007, the company produces a range of organic products and dried fruits, which marked a new era of Kalamata Papadimitriou. Today, the company distributes its products in 29 countries including Australia, South Africa, Canada and Japan. The product quality and consistency across the public, as well as the evolution of the brand under the new circumstances of the 21st century, helped Kalamata Papadimitriou’s products to thrive in a worldwide scale! 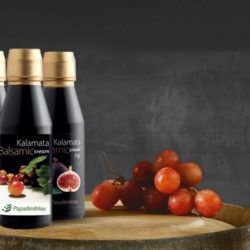 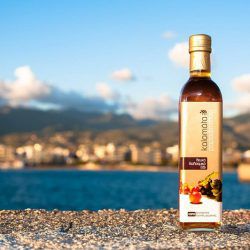 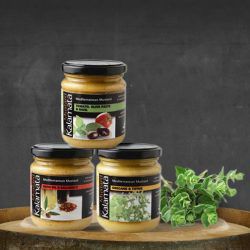 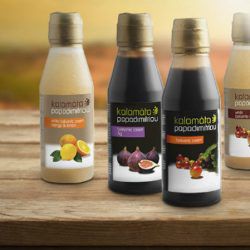 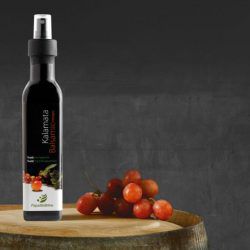